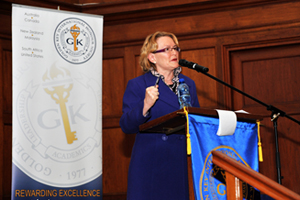 Take your time: Western Cape premier Helen Zille, keynote speaker at the induction of some 450 members from the UCT chapter of the Golden Key International Honour Society.

Why do promising young scholars and leaders fade after reaching their zenith early in life?

Zille and Ackerman-Berman were also inducted as honorary members of the Golden Key International Honour Society and keynote speakers at the recognition ceremony of some 450 new inductees from the UCT chapter, one of 16 in the country.

Founded in 1977 and described as the world's largest honour society, the Golden Key International Honour Society is an organisation that recognises the top 15% of achievers across the academic disciplines at over 400 universities in Australia, Canada, India, Malaysia, New Zealand, South Africa, The Bahamas, and the US.

Zille encouraged the bright, young achievers to develop all their intelligences: intellectual, emotional, social, and intuitive.

"These all gel to keep you on course for a sustained time."

And just as there were difference intelligences, so too were there different rates of peaking, Zille added.

"People who peak too early are on a downward slope. The first person who will live to 150 has already been born; so peak late. You have decades and decades ahead of you."