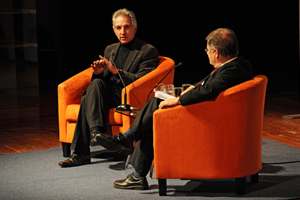 New ground: Judge Dennis Davis in conversation with VC Dr Max Price in the Baxter Concert Hall, where Price reflected on his first term in office and the challenges expected in his second five years at the helm.

When Vice-Chancellor Dr Max Price delivered his installation address to a Jameson Hall packed with dignitaries on 19 August 2008, the watchwords were redress and transformation, academic freedom and integrity, research excellence, and engaged citizenship.

Five years later and into his second term, these remain fundamental goals for UCT. Price emphasised this in the convivial Baxter Concert Hall setting on 19 August - five years to the day he made his first address - in what was billed as a 'light conversation' between himself and Judge Dennis Davis.

Dominating that conversation was a reflection on Price's first term in office, and some tough questions on progress and the abiding tests that UCT faces barely 20 years into democracy.

Questions from across campus

The floor was opened to questions from academics, PASS staff and students, underscoring what Price called for in his first address: that universities should offer spaces which encourage new ideas, controversy, argument and challenges to orthodoxy.

The forum setting in the Baxter was certainly unorthodox, reminiscent of the set of Davis's award-winning television current affairs programme Future Imperfect, which the UCT alumnus and honorary professor hosted between 1993 and 1998.

UCT's ninth vice-chancellor, Price used the opportunity to refresh institutional goals, and reflect on how the university works and on its role in building the country - and its reach into Africa and beyond.

Price did not present a formula for the next five years, stressing that it was not the end of one chapter and the beginning of another; but rather a seamless transition. The impetus and gains of Price's first term will be consolidated in his second.

Not least of these have been the identification of four critical research areas for the country, with which UCT must engage: crime and safety, climate change, the quality of schooling in South Africa and poverty and inequality. The appointments of four pro vice-chancellors to tackle these issues have laid a solid foundation for the next five years.

Much work has also been done on equity across the staff and student bodies and on financial aid to students, to ensure UCT is able to attract the best candidates and develop its research thrust and its efforts to become an Afropolitan institution with strong international networks. Members of the audience, and in particular representatives of students and staff, were invited to pose questions from the floor, delivering an interactive and in-depth discussion on the state of UCT. Davis also had a slate of questions sent by email.

He tackled Price on state intervention in the autonomy of universities, the judiciary, constitutionalism and academic freedom, particularly in the wake of the Protection of Information Bill.

"We rose to that," said Price, "with campaigns and by joining the public march. The Bill was substantially amended." Price's first term has been marked by civic engagement at many levels.

Race and equity dominated the conversation, given the perennial tension between diversity, equity and the university's institutional culture. While UCT had made much progress, these areas remained high priorities, said Price.

The thorny issue of separating teaching and learning was mooted. Price said the university was considering appointing academics who would teach and not be expected to conduct research at a high level, and others who would plough their energies into research and whose burden of teaching would be alleviated.

Davis raised the question of money and ethics. "Does the university take money from anybody?" he asked. "Not tobacco companies," Price said.

"So beer is okay?" Davis quipped. "But our being a green university, will we take money from polluters?"

Transformation dominated the conversation in many guises, but pointed questions were asked about UCT's student and staff complements, with Davis asking how a Eurocentric, white institution could call itself Afropolitan.

"Transformation is a huge question and I believe we are nailed unfairly and unfairly criticised," Price said, citing figures pointing to a rise in black student enrolment (and a shrinking number of white students).

Bound up in this was the university's "race-informed" admissions policy which, said Price, had been criticised "to the left and to the right" and was now under major review.

"We can't move backwards from what we've achieved," Price said. "The trend is irreversible. We are becoming a more black university." New information on applicants would provide more in-depth information that could be weighted to determine disadvantage. Price denied, however, that UCT was becoming a class-based institution - a "non-racial bourgeoisie", according to Davis.

"What's your vision, what's your ideal context on the non-racial issue?" he prompted. "We concentrate on numbers too much," said Price. "That's one side of it. We also have to focus on institutional climate."

"What are the key challenges for the next five years?" Davis continued. "The threat to our source of income," said Price. "Government is reviewing its funding formula; more of the pie is being distributed to historically disadvantaged institutions. Even the NSFAS formula is against us." Online learning also posed a threat to traditional class-based teaching and learning, Price said.

And his worst moments?

"Trade unions," said Price. "When the Academics Union threatened to strike, we negotiated through the night to come up with a solution."

It was Chair of Council Archbishop Njongonkulu Ndungane who left Price with his biggest challenge for the next five years: "Take this university to where it has never been before."