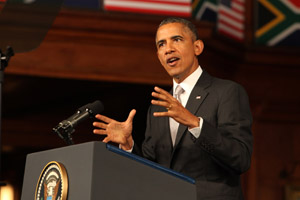 While United States President Barack Obama has begun developing further economic ties with South Africa, his speech delivered in a tightly-packed Jameson Hall at UCT last night sent out a loud-and-clear message to students and other young South Africans: that Africa's fate is in their hands, writes Tanya Farber.

Referring to US Senator Robert Kennedy's historic speech on the campus in 1966, Obama spoke about the civil rights movement in his home country during that decade, and a South Africa that was still knee-deep in the brutality of apartheid.

"It would have seemed inconceivable at that time that less than 50 years later an African American president might address an integrated audience at South Africa's oldest university," he said, "and that this same university would have conferred an honorary degree on Nelson Mandela."

Speaking of his own political stirrings as a nineteen-year-old college student, Obama said it was a visit by young South Africans in exile that first ignited his political spirit.

"It was the first time that I attached myself to a cause," he said.

Encouraging students and other young people to recognize their own strength, he told the audience of a '˜supporting act' speech he had made at a political rally shortly after encountering the exiled South Africans.

"I remember struggling to express the anger and passion that I felt. I didn't think I had made a difference and I was embarrassed," he said, "But looking back at that nineteen year old, I'm more forgiving towards myself that the speech wasn't perfect and rather, I see the value of believing that I could be part of something bigger than myself."

He said that when his wife, Michelle Obama, visited South Africa in 2011, she was most impressed by the work of ordinary people on the ground who were using everything they had to make a difference.

He later reminded the UCT community that it wasn't just the "giants of history" who brought apartheid to its knees, but that it was also "ordinary people who pushed against the wall of oppression and indignities."

He said that in today's Africa, where young people outnumber older people, it made demographic sense that students and other young people could bring about the change that the continent needed.

"That's where young people come in," he said, "It is you who get to decide. You are going to determine the fate of this continent, and the world will be watching what decisions you make. My bet is on the young people for the heartbeat of Africa's soul."

Later, to loud applause not only from the students standing behind the podium but to all who had gathered, he said, "governments exist to service people, and not the other way around."

He added that peace and prosperity also depend on the attitudes of ordinary people, and that '˜nobody is born hating another person'.

"If a child can learn to hate, they can also be taught to love," he said, quoting the words of Nelson Mandela.

And, while Obama's speech covered many topics that are close to South Africans' hearts, he frequently referred to former president Nelson Mandela and how his work had been a beacon of light to all who wished to see a better South Africa.

"Madiba's health weighs heavily on us," he said in his opening lines, and later went on to refer to milestones in Mandela's political life which had set an impeccable example.

He later said, "Democracy can only endure if it is seen as being bigger than one person. Mandela's decision to leave power was just as important as his decision to take power."

Obama also raised loud applause in the hall when, speaking on gender-based violence and prejudice, he said, "You can measure how well a country does by how it treats its women".

But, his most noteworthy announcement during the speech that was also met with audible praise, was about a project that could have a large impact not only South Africa but other sub-Saharan Africans countries too where two thirds of people live without electric power.

Announcing a ground-breaking project, Power Africa, Obama said the aim is to double the number of people who currently have access to power in sub-Saharan Africa. He said his country had put 7-billion US Dollars while the private sector had put forward 9-billion US Dollars.

"We will develop new sources of energy for cities and farms," he said.

But, despite delving into a myriad serious issues during his 45-minute address, Obama also raised a healthy laugh when he thanked South Africa for its cultural exports like local band Freshly Ground, ever-growing grilled chicken franchise Nando's, and, since the 2010 FIFA World Cup, the inimitable sound of the vuvuzela.

"Although," he said with a broad grin, "I am not so sure that the latter is the best gift ever for you to have given the world."

Obama had spent the earlier part of the day on Robben Island, and today he sets off to Tanzania for the last leg of his African tour.