Cold snap no contest for Obama 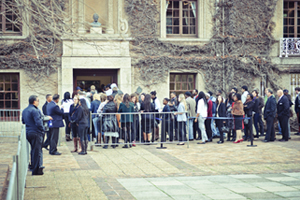 An icy South-Easter and a queue that seemed to stretch forever were not enough to put off throngs of visitors jostling to see US President Barack Obama's historic address in UCT's Jameson Hall on Sunday. And few, it seems, were disappointed. Warm applause and nods of approval from the crowd punctuated his speech from the moment he took to the lectern just after 18h00.

Some guests said they were surprised at the turn-out - approximately 1 000 guests - given that the event did not feature in mainstream media. "I found out about it on Facebook," said Makhosazana Mthetwa, an architecture masters student, while a small number of others only got tickets at the last minute when other guests failed to arrive.

The chilly weather had kicked in on Sunday afternoon just hours before the event, while during the lead-up days, unseasonal sunny weather made it easier for construction and SuperCare personnel who worked at fever pitch to prepare the area for the big event.

When everything was finally complete and the event began, even the media outnumbered the few dozen anti-Obama protesters who had congregated opposite the Sports Centre. Little seemed to come of earlier reports that Cosatu would join and might even lead protest actions against Obama's visit.

Story by Abigail Calata and Yusuf Omar
Picture by Jenine May