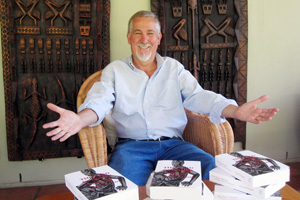 Emer Prof Richard Whitaker spent a decade on his careful translation of the Iliad of Homer for South African audiences.

Homer's epic of Troy, the Iliad, has been translated into English scores of times over many centuries. So why yet another translation? Emeritus Professor of Classics Richard Whitaker says that his version of the epic is different, and meets a need.

After decades teaching the Iliad in English to South African students, Whitaker says he became dissatisfied with the imported American and British translations he and his students had to use, since no others were available.

"I began to feel there were elements in the poem that could appeal directly to South African readers. And also, that local English now had a register and range of its own that should be represented in translation of 'the Classics'."

And so he set to work directly from the Ancient Greek, producing his own poetic translation of the 15,000-line epic. Muti, induna, indaba, kraal, kloof, assegai, lobola and amakhosi - all these are words that find a place in his version of the Iliad. Instead of reflecting the world of European elites as earlier translators had done, Whitaker tried to mirror a world closer to home.

"In my view," he says, "there has been a kind of 'cultural inflation' in translations of Homer, with their 'palaces', 'princes' and 'kings'. I see the Homeric world as something smaller-scale - much more like a tribal world of small warring communities headed by chiefs, than one of royal courts and sovereigns."

Whitaker also tried, in his translation, to pay tribute to South Africa's powerful tradition of oral praise poetry. Like great local leaders of the past, the warriors of Homer's world also had their memory kept alive by a purely oral tradition. So Whitaker translates the Greek words usually rendered into English as 'fame' or 'glory' as 'praises' and 'praising' instead.

Although Whitaker had primarily local readers in mind when he produced his translation, he has been surprised (and delighted) by the international interest in his work. South African newspapers and radio stations have interviewed the translator, but it was the US Wall Street Journal of 11 November 2012 that got in first, with a long, front-page article on his Southern African Iliad.

The WSJ was followed by the Daily Telegraph, and any number of online news services, from Moneyweb and the Middle East North Africa Financial Network, to the Greek World Reporter and Hindustan Times.

It seems that this local version of the Iliad has something to say to non-South Africans as well. Washington-based British writer and former journalist Simon Barber comments on the Wall Street Journal website: "Speaking as a Cambridge-trained classicist who has spent the past 30 years writing ... about South Africa, I cannot recommend Whitaker's translation too highly, and not simply because of its South Africanisms. This is a great translation, finish and klaar. As for the South African vocabulary and idiom, words like inkosi, indaba, induna and impi actually take us much closer to what Homer was singing about than their English equivalents."

How does the translation relate to Whitaker's earlier literary research?

"I feel as if I have come full circle," he says. "In 1989, in my inaugural lecture at UCT, I spoke about Homer and oral poetry and their relation to South Africa. Now, in 2012, my Southern African translation of the Iliad is basically a creative reworking of these same issues."