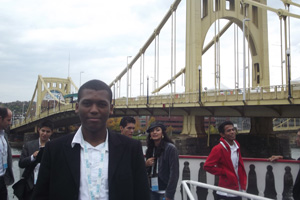 Outside of the Olympic Games, the claim goes, no youth-dominated event brings together participants from more countries than the One Young World Summit.

That is why UCT's Mziwamadoda Mbedu was determined to use the summit to represent the views of South Africans as accurately and thoroughly as possible. As a South African delegate among approximately 1,500 international peers at the 2012 instalment of the summit, which ran from 18 to 22 October in Pittsburgh, USA, Mbedu spotted an opportunity to give the South African agenda some air time.

"The summit creates a space for dialogue on possible solutions to many global issues," explains the second-year BCom student. "It mainly challenges world leaders to shift focus and bring the more rapid and ready change that the world so earnestly desires."

The event focused on six areas: global business, the environment, health, interfaith dialogue, leadership and media. Bill Clinton led the council, with individuals such as former secretary-general of the United Nations Kofi Annan serving as counsellors, along with a number of multi-national corporations. The summit plays an influential role in global leadership, and is not just the average "talk shop", says Mbedu. When Bill Clinton was asked what he thought were the world's three main problems, he listed inequality, instability and unsustainable development.

The summit serves a dual role, primarily. Apart from bringing dialogue and solutions, it creates a platform for individuals to get support for any ideas, projects and movements they may have in mind to improve their society. This is through the network they create with other delegates, the councillours, the companies associated, and also the organisation itself. This year saw the launching of the social business fund, and everyone was welcome to apply for funding.

"The One Young World Summit is bid for by different cities each year around the world, and we as South Africa have been so fortunate, since the summit next year is going to be hosted by Johannesburg. Hopefully many young people from Africa will be present" said Mbedu.

"There is a change coming in the way we view the world, and many call it a social revolution," he opines, citing increasing pressure on business to holistically benefit all stakeholders, including workers and the environment, as a prime example. Also, there has been mounting oppositions to governments in different parts of the world.

As delegates to the summit continue working once the final session closes, Mbedu is now keen to engage with the UCT community as much as possible. "I need people's views on how we can convince world leaders that there is a need for a change, and that this change can benefit them," he says. "There is an ongoing forum that continues conversation on these topics, and its essential that I gather and represent South African views on such matters."