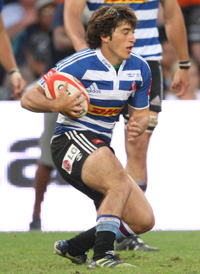 The general: WP flyhalf Demetri Catrakilis, scorer of the winning points in the Currie Cup final, represented UCT before making the jump to inter-provincial rugby.

With fans of Western Province rugby having enjoyed the team's victory parade through Cape Town on 30 October after WP's first Currie Cup trophy in 11 years, UCT can proudly point to a strong Ikey connection to the thrilling final in Durban on 27 October.