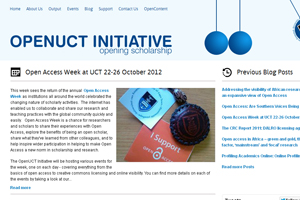 Today marks the start of Open Access Week - a global event, now in its sixth year, which aims to raise awareness about open access issues and encourages academics to spread the word as well as their scholarly outputs.

Open access is the free, immediate, online access to the results of scholarly outputs, and the right to use and re-use research and scholarly output as needed; it is free scholarly content made available under an open license, usually Creative Commons. While it is often understood to refer to research output, increasingly it applies to all scholarly output 'grey resources' (eg policy material, technical reports and popular dissemination) and teaching content.

Open access offers many advantages, especially visibility, particularly important for academics in developing countries, and access to knowledge for those who don't have the funds to buy expensive journals through subscriptions to hugely expensive databases. Open access is a contribution to both development and to innovation.

The fact that access is limited may be invisible to those at UCT - the giveaway for UCT academics being the fact that many of the articles read or downloaded by academics at UCT state "brought to you by the University of Cape Town", thus indicating that the university has a subscription. However, for members of the public, non-profit organisations and smaller institutions, among others, these articles are largely inaccessible.

Currently, there are two main routes of open access publishing: the green route and the gold route. Going green allows for the self-archiving of scholarly output. Usually this takes place by depositing either a preprint or postprint of your article in an institutional or subject-focussed repository or a website where it can be properly curated; this makes it freely available online. Many publishers allow this although the specific conditions under which you can self-archive and which version you can use vary. Academics sometimes make available an earlier version of a piece just so that it can reach the widest possible audience.

The gold route is the publishing of journal articles in open access journals which make the final published version of the paper freely available to users. This route may require an article processing charge (APC) from the researcher. The gold route to open access has received a great deal of attention in recent months since policies from Europe and the UK have recently come into existence which require that research funded by bodies such as the European Commission and the UK's Department for International Development (DFID) will have to be published open access. While this seems far away, the recent UCT Research Report reports says that UCT received research contracts from DFID for R65.9, from the National Institute of Health (NIH) in the US for R92.4, and from the EU R31. 2 million, thus bringing this policy requirement right to the UCT door step.

Open access has been showed by numerous studies to increase citation to scholars' work of all kinds. The online environment also means that new forms of impact can be measured and in new ways. Alternative metrics (ALTmetrics) provide a new approach to analysing impact beyond that of tradition citations, considering other indicators such as downloads and references in social media.

The internet has shrunk the world and allows scholars to connect and collaborate across the globe in real time. In this digital world, opening up access to not just journal articles but all outputs and information has incredible power to transform academia and society as a whole. Academics at UCT will have the opportunity this week to engage with these issues and more through several events being run by the OpenUCT Initiative.

All events will take place in the CHED Boardroom, Hlanganani Building Level 6, Upper Campus
Please RSVP to attend any of the events

Exploring 'Impact': An introduction to new tools and approaches for alternative scholarship metrics

Download the programme for more details on the events. The OpenUCT Initiative site will be live this week and you will be able to follow the events as it happens, find out more information about Open Access Week and about open scholarship at UCT.