The history of oppression in the textile industry revisited 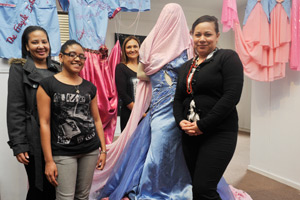 Renegotiating identity: Dr Siona O'Connell (middle back) with representatives of the Southern African Clothing and Textile Workers' Union at an exhibit from Spring Queen - The staging of the glittering proletariat.

The plight of factory workers in Cape Town's textile industry was highlighted recently at a public lecture hosted by UCT's Centre for Curating the Archive (CCA) and the African Studies Unit.

Dr Siona O'Connell, curator at the CCA, spoke of her fascination with the Spring Queen pageant - an annual fashion competition that pit workers from the different factories against each other. O'Connell reflected on the effect curating the exhibition titled Spring Queen - The staging of the glittering proletariat had on her.

In her lecture she revealed that through Spring Queen, "we are reminded of the ongoing story of a violent past and of injured bodies". At the same time that the pageant masks the factory workers' "lived experiences of oppression", it also hints at "flashes of freedom".

"It is a reminder that the lives of factory workers matter, and that they are not inconvenient, disposable remnants," she said.

Another speaker at the event, architect Ilze Wolff, is conducting research on Rex TrueForm, a clothing company that had a large manufacturing operation in Salt River. The factory closed in 2006 and now the company focuses on retail.

Wolff looks at the factory buildings and the contrast between the "celebrated spaces" where power resided, and the "messy, complicated areas" housing the workers. According to her, the contrast is indicative of the "uneven relationship between white capital, which was endorsed by the (then) State, and black labour".