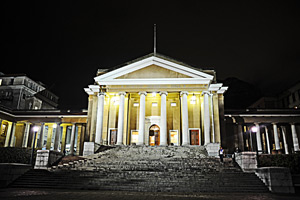 UCT has been placed at 113 in the Times Higher Education (THE) World University Rankings for 2012 released on 3 October. The university was ranked at 103 in 2011 and 107 in 2010. In addition to being once again ranked among the top 200 universities in the world, UCT has also, more significantly, been listed for the first time among the Top 50 clinical, pre-clinical and health universities around the world.

Acting vice-chancellor Professor Danie Visser said: "Our ranking remains a measure of consistently high international standing and reputation. Our positions over the last three years indicate a consistently strong performance relative to the thousands of other universities around the world who are ranked by the THE system." In fact, UCT's scores rose over the year in all but one of the system's measurement categories:

The THE system uses 13 individual performance indicators, which are intended to cover all three core missions of a university in its methodology: research, teaching and knowledge transfer. The highest weighted category remains "research influence", measured by the number of times a university's published work is cited in the papers of other academics. Knowledge transfer activities are also included in an "industry income - innovation" category (worth 2.5% of the total ranking score) based on research income from industry.

"There are thousands of universities in the world and the rankings are a relative positioning," said Visser. "It is possible for a university to score better on all the criteria but still end up lower on the rank scale, just because some other institutions tried even harder."

"It is gratifying to be so well regarded by our peers, but we remain conscious that different institutions have their own strengths and bring their own particular value to their students. As a research-led university, UCT does well in global rankings because they all place a particular emphasis on research," said Visser.

UCT also performed well in the Shanghai Jiao Tong Academic Ranking of World Universities (ARWU), released in August. The ARWU ranking for UCT remains unchanged in the 200-300 range, ranking UCT, once again, as the top university in Africa. The University of the Witwatersrand (Top 400) and the University of KwaZulu-Natal (Top 500) are the other South African universities that made the list.

"The high international rankings held by UCT and other South African universities help to send out the message that students can receive a world-class education in South Africa. However, the rankings do not measure many crucial aspects of a particular university's mission, especially in the developing world," said Visser.

"For example, UCT devotes hundreds of millions of rands to promoting access to financially needy students who would not otherwise be able to come to a world-class university; to development programmes that recognise the inadequate academic preparation of many students admitted to UCT; to outreach projects that engage with communities that are in need of our support where we can be of use; and to research that addresses the key challenges of our society, such as infectious diseases, poverty and inequality, violence, climate change, and countless other issues. None of this is recognised in the rankings systems.

"Thus while we are enormously proud of our achievements on the international playing fields, concern for rankings should never deflect us or any university from pursuing its duty to be socially responsive to the needs the community in which it lives."

Full results of the Times Higher Education World University Rankings are available on the THE website.