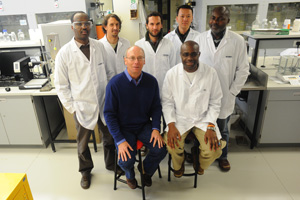 June 2007: The idea of a drug discovery centre in South Africa is first raised in a discussion between Prof Kelly Chibale and ex-colleague Dr Frederik Deroose of the pharmaceutical company Jansen and Jansen in Beerse, Belgium.

July 2008: Chibale, Tim Wells (chief scientific officer at the Medicines for Malaria Venture (MMV), and other associates draw up a draft business plan for a drug discovery centre at UCT; all this took place at Terminal 1 of Heathrow Airport in London (UK).

September - December 2008: Chibale spends a period of sabbatical at the pharmaceutical company Pfizer in the UK, to learn about pharmaceutical industry drug discovery.

2009: Seed funding for the development of a detailed business plan for the establishment of a sustainable drug discovery centre is made available.

April 2010: The H3-D Drug Discovery and Development Centre is established.

2011: The compound is successfully tested on animals.

2020: Estimated year in which an anti-malaria drug combination regimen containing MMV390048 may enter the market.