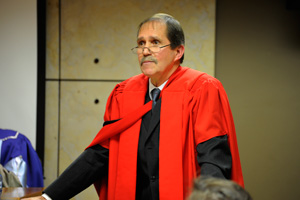 Class act: Prof Wouter de Vos believes the time has come for government to introduce legislation that would pave the way for class actions in South Africa.

Class action is a headache for authorities. On the one hand, it is often regarded as the last resort for large groups seeking relief for the infringement of their human rights and freedoms. On the other hand, critics see class action as a threat to big business.

But, as Professor Wouter de Vos recently demonstrated in his inaugural lecture, Is a Class Action a Classy Act to Implement outside the Ambit of the Constitution?, such a route is a must in this day and age.

A case in point was the 2010 class action filed by the Children's Resources Centre, Black Sash, COSATU, the National Consumer Forum and five private individuals against major bread producers Pioneer Foods, Tiger Consumer Brands and Premier Foods, after the latter three companies had been found guilty in 2006 of participating in a cartel to fix the price of bread. But the case was dismissed because, according to the High Court, the class had not been properly identified. The court also found that there was no contractual basis for the applicants' claim, no personal injury had been alleged, and there was no delict, ie no negligence, among other reasons for dismissing the case.

De Vos, though, believes the judgement can be the foundation for further developments of a non-Bill of Rights class action for damages.

He noted that the law is lagging "dismally" behind other jurisdictions in this field. He suggested that the government should adopt the English opt-in style of group action - which prevents courts from making awards in favour of members of a large group who have taken no steps to be part of the proceedings - as a more cautious approach if it is reluctant to take a full-blown route.

"The law cannot ignore the needs of the mass-oriented society of today, which is characterised by mass production and mass supply of goods and services by huge corporate enterprises, mass transport and an-all powerful government that is involved in all spheres," De Vos explains. "These activities generate events that can cause similar harm to large numbers of people. These people can only obtain effective access to justice through a collective remedy such as class action."