Unique guitar "a joy to make music on" 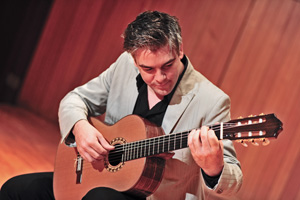 Classical guitars are not only capable of producing breathtakingly beautiful sound; they are also instruments of exquisite elegance. All the more so when the instrument has been handcrafted by a master luthier who produces only four to six instruments per year.

This is the kind of masterpiece James Grace (head of classical guitar studies at UCT's South African College of Music) acquired recently. His handmade six-string classical guitar was produced by Jeff Kemp in a remote town near Armidale, halfway between Sydney and Brisbane, Australia.

Grace says Kemp played his CDs in the workshop while he was making the guitar so that "he (Kemp) could try and recreate the same type of sound I was used to". Grace is no stranger to Kemp's craftsmanship. He bought one of Kemp's guitars in 1995, second-hand.

After he fetched the guitar from Australia, all he wanted to do was to start playing it.

"It felt a bit unfamiliar, but after spending a few hours just exploring the different sounds I could get from the guitar, I started to get used to it, and it became a joy to make music on," says Grace.