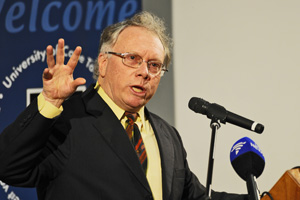 Future-oriented: Restorative Justice is about restoring the victims, the offenders and the communities, Prof John Braithwaite said at the latest Vice-Chancellor' s Open Lecture.

Vice-Chancellor's Open Lectures are meant to benefit the community and leading criminologist Professor John Braithwaite's contribution on 26 July, Restorative Justice: Republican Vision and Justice as a Better Future, did that.

Based on many years of research, his address offered important lessons and ideas on how South Africa could address crime. (UCT has prioritised its contribution to addressing crime by establishing the Safety and Violence Initiative, among other projects).

Braithwaite, of the Australian National University, touted restorative justice as the way to go. It's a concept that dates back thousands of years, but which has not been fully exploited in some parts of the world.

Restorative justice focuses on the needs of the victims and the offenders, as well as the community affected, instead of satisfying only abstract legal principles or punishing the offender.

For instance, a restorative justice setting may require offenders to repair the harm they've done - by apologising, returning the stolen goods, or rendering community service - provided they agree to change their behaviour. In so doing, it reduces crime and punishment and, therefore, gives people more freedom, Braithwaite noted.

"It is about restoring the victims, the offenders and the communities," observed Braithwaite. "It's a future-oriented concept that invites people to take active responsibility to put things right going forward. As crime hurts, justice should heal."

In fact, Braithwaite believes that 95% of prisoners could have been dealt with in other "productive" ways, such as restorative justice, which empower people, with punitive options.

South Africa's own Truth and Reconciliation Commission (TRC) is a good example of restorative justice. However, while the TRC was effective, it had many imperfections too, Braithwaite noted.

The TRC couldn't deal with the scope of healing needed by so many victims of apartheid atrocities in just three years, he said.

"That was not a productive way of justice as a better future".

Rather, a permanent TRC was needed to deal with different dimensions of justice, he suggested.

Evidence shows restorative justice, in some contexts, could help resolve gang conflicts, a problem that continues to plague the Western Cape. Such a system could also be considered in the schools, Braithwaite added.

"What I'm hoping for are conversations where people are more cynical about the counter-productive punitive justice system and are open to restorative forms of justice."

In his introduction to the lecture, Price noted that South Africa's first significant legal foray into restorative justice was through the Child Justice Act of 2010, which provides for several 'diversion' options, including family group conferencing, and victim offender mediation.