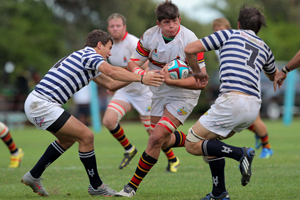 Onslaught: Try as they might, UCT was unable to keep UP at bay in the sides' clash on Monday.

With FNB UCT already ruled out of a semi-final berth after last week's round of FNB Varsity Cup matches, fans were possibly hoping that the Ikeys would bow out of the 2012 competition in a blaze of glory.

But it was not to be, as a late rally from FNB UP Tuks condemned the defending champions to an 18-29 defeat at a sombre Green Mile in their tie on 19 March. Fans were left with their heads in their hands as the home team squandered an 18-8 lead in a disastrous final 10 minutes to the University of Pretoria outfit, in what would have been UCT's final match of the competition for the year.

Foote refused to blame last season's exodus of players for the poor showing this term, instead declaring a need to better understand refereeing decisions and, importantly, for more drive from the UCT players and staff.

"We need more hunger. I think we were down on that a little bit compared to last season, from everyone - myself, management. I feel like we've let the university down."

It was a particularly disappointing night for UCT loose-head prop, Wesley Chetty. The most-capped Varsity Cup player ever, with more than 40 appearances to his name, Chetty had hoped to end his stellar career - which included three final appearances - on a winning note.

But he has one more game to get his wish.

Their second-from-bottom finish means Foote's men must scrap for their Varsity Cup lives in a promotion/relegation play-off against the runners' up of the second-tier Varsity Shield competition, which could be either Wits or Free State's Central University of Technology.

That clash will, for now, be the Ikeys' single-minded priority, says Foote.