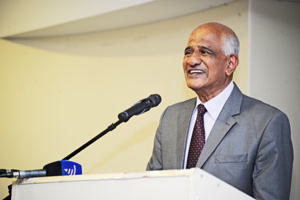 At a time when everyone's eyeballing the legislature's every move and every reported threat to the Constitution, the Democratic Governance Rights Unit's (DGRU) third annual Constitution Week, or conweek, running from 12 to 15 March, is well timed.

So, too, were the remarks by Constitutional Court Judge and Acting Deputy Chief Justice Zak Yacoob in his opening-event address, A Dynamic Constitution?. Among other things, Judge Yacoob turned his attention to the powers vested in the Constitutional Court, a topic under the spotlight since President Jacob Zuma announced last month government's intention to review that authority.

"In my view, the Constitution itself has its own checks and balances in relation to the power of the judiciary and its possible political impact," cautioned Yacoob.

But judging is not a mechanical exercise, and judges "can never escape our own humanness", he added. "The fact that judges differ with each other is therefore not something to bemoan. Differences of opinion are vital to a healthy judiciary and to the development of a vigorous jurisprudence."

The four-day-long conweek aims to get law students fired up about the Constitution and its importance to South Africa. This year, hot topics such as the arms deal, the role of education in realising constitutionalism, and the Traditional Courts Bill will be mooted.

Rather than shy away from these conversations, the country - and the legal fraternity - should enter into a robust conversation about it, advised DGRU director, Professor Richard Calland. These, after all, are the makings of a dynamic constitutional order."We should not be squeamish about these debates," he said.