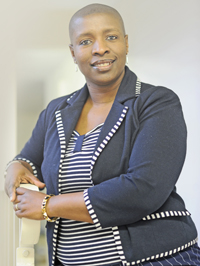 When Zetu Makamandela-Mguqulwa started in her post as UCT Ombud on 1 January 2011, neither she nor anyone else really had an idea just how the post would pan out. Or, for that matter, what kinds of issues she would have to deal with. Now, a year and a sharp learning curve later, everyone has a better sense of the post and its duties. Monday Paper spoke to Makamandela-Mguqulwa.

MP: Did 2011 work out quite the way you imagined?
ZM-M: As you correctly put it there was no script, yet to a large degree, I agree. Early days went to establishing and promoting the office, understanding the role in the UCT context, learning and forging professional relationships with ombuds locally and internationally. (In the process I found the best mentor in the field, Mary Rowe of MIT.) There have been many times when people expressed their gratitude for the positive outcomes to their matters. Sometimes, I would not even know about the end result. A handful walked away disappointed that I did not support their intended course of action, but hopefully with appreciation of what informed my views. There were surprises and anxieties along the way. The first few months were quiet, but I used the time well, meeting with deans, the SRC, executive directors and the like - people who would probably be the first that those who would eventually call on the Ombud would turn to.

MP: When the Ombud post was created, there seemed to be uncertainty about where along the grievance process the post would fit.
ZM-M: There is role clarity across the offices where duplication of effort was possible or perceived. These are HR, DISCHO, and the office of the Ombud. The former are UCT offices, while the Ombud is independent and sits outside the UCT grievance process, which is a formal approach. When I assumed office I had looked after mediation on campus; I recently recommended to the university that mediation be relocated to the Transformation Services office as a policy-driven UCT approach to resolving conflict. This is to protect the independence and informal standards of the Office of the Ombud.

MP: You've dealt with nearly 300 queries, covering just about everything. (See pie chart below.) Is that caseload too broad perhaps?
ZM-M: Broad yes, but if you look closely at the issues that people bring, they are inter-related. Some emanate from the university systems, eg compensation and benefits, but even system issues are people-driven. It is in this role that I learned that 'soft' is the new 'hard'. I have been struck by two abiding things in most complaints I heard: harshness of treatment and fear of retaliation. While I recognise that I saw a tiny fraction of what may be a largely contented, appreciative and loyal UCT community, it is worth noting that my visitors were less provoked by what was done, than how it was done.

MP: Are people making use of the office in the way that you would like? Or do you think there's still fear to knock on your door?
ZM-M: As I've mentioned, most people still choose to stay away from this office in fear of retaliation, being judged as not coping with their problems or seen to be escalating the issue prematurely and unnecessarily. For instance, there is a staff member that I have not seen in person, yet almost on a monthly basis she sends complaints electronically. I cannot quite help her to resolve her problems as I do not use e-mail for this. I offered to meet with her after hours for her protection and maybe over coffee if she wants; she is yet to respond.

MP: You mentioned once that you don't quite have the judicial powers to tell UCT what to do or not do, or that person A is right and person B is wrong. Is that what people hope for when they call you?
ZM-M: While my office has authority derived from Council with privileges, eg confidentiality and access to information, it does not have the power to dictate terms to the university or to anyone; nor can it impose sanctions. I cannot judge who is right or wrong. Clearly it does not matter in this office. This may be the only office that has such a rare value of not judging people, hence people should take advantage of it. What really matters is what is fair, reasonable and in accordance with the university policies. It is also expected that my office would function as an early-warning system should the policies themselves fail the university, for one reason or another.

MP: What do you foresee to be the main focus/issues for your office in 2012?
ZM-M:After the first report and first-year experiences, and as I compile additional data and insights, there may be more opportunities to provide upward feedback and recommendations for systemic change and improvement. Also, when people approach the office of the Ombud, they seem to not understand the mandate of the office, where it fits in helping them to resolve their problems and what their role is in the process. Based on this experience my further three priorities would be education, education and education! 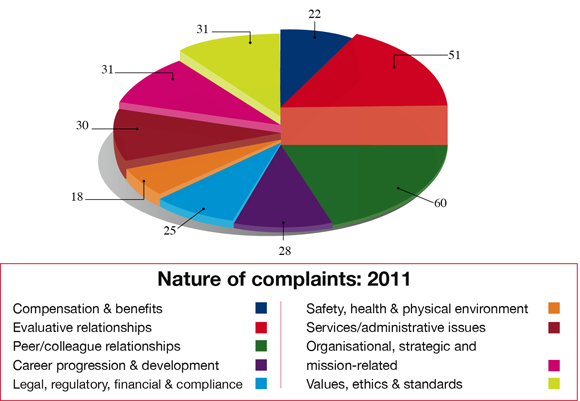