Exhibition a response to artist's book 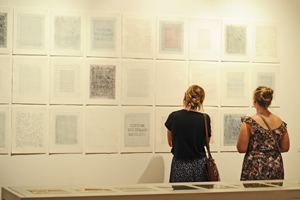 Not for the artists exploring the printed text - using the 'book object' as a conceptual reference - in Context, a new exhibition running at Michaelis Galleries until 7 March.

The exhibition, says Saptouw, is a response to the work of Michaelis' newest artist-in-residence, American curator Mark Dion.

During his time here, which was arranged by the UCT Centre for Curating the Archive and funded by the Mellon Foundation, Dion is working on a project that will be exhibited at Documenta 13 in Kassel, Germany, later this year.

In this work, he continues his long-term exploration of the curating of objects - curating in the modern sense, in which disparate objects are brought together in novel and creative ways to suggest new meanings. The collection of objects in question is the Schildbach Xylotheque, a wooden library housed in the Natural History Museum in Kassel. The library comprises 530 volumes of 441 European tree and shrub species - in encyclopaedic arrangement - each complete with bark spines, and containing a three-dimensional representation of the tree's life cycle.

Dion is adding six new books to the Xylotheque, each presenting a specific wood from one of the five continents not included in the original library. The six books will be created during various residencies around the world.

Having already produced three books, he moved into the Michaelis Upper Gallery to create the fourth - the African installation, that of the Camphor Tree, a colonist tree to the Cape, first introduced here around 1670.

"The book is almost complete," said Thomas Cartwright, project manager at the Centre for Curating the Archive. And that's no mean feat - Dion's schedule here has been jam-packed with workshops and lectures.