Second round blues for UCT 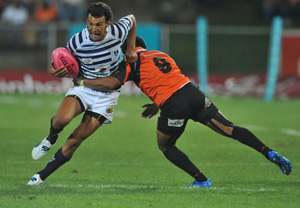 Nowhere to go: The few UCT attacks were quickly stamped out by UJ, as here the Vikings' Rudie Paige tackles UCT's Dillyn Leyds.

The FNB Ikeys remain without a single log point in Varsity Cup 2012 after a disappointing 15-29 away loss to the University of Johannesburg (UJ) on Monday, 13 February.

The defending champions couldn't recover from a first-half blitzkrieg in which their hosts racked up four tries. The Ikeys' failed to heed an early warning when UJ winger Chrysander Botha dotted down in the first minute of play.

UCT's first riposte came just before the break through scrumhalf Nick Farrar. But the five-pointer was too little too late against a UJ side boasting two Rugby World Cup veterans in Botha and flyhalf Worsie Kotze. With the points safely stashed in the bank, UJ made UCT toil for their second try. Winger Damian De Allende's late touch-down gave the score-line a modicum of respectability.

After defeats in their opening two matches, UCT now faces an uphill battle to successfully defend its crown. More urgently, they will quickly want to shake the ignominy of being, along with the Tshwane University of Technology's Vikings, the only winless teams of the tournament.