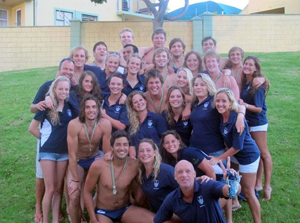 Winners: The water polo teams had reason to smile after their showing at the USSA games.

The men's team came home triumphant, having convincingly beaten all comers. That included a resounding 9-5 victory over archrivals University of Stellenbosch in the final, their second win over the Maties in the competition.

The women's team couldn't manage top honours, but did claim the runners-up spot after narrowly losing 8-10 to nemesis Maties in the final. (In direct contrast to the men, they lost to Stellenbosch twice over the competition.)

"(It) was hugely pleasing for the team, and served as a considerable confidence booster."