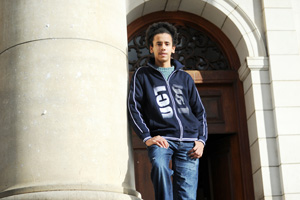 As the South African Olympic team returned home with a record medal haul, UCT's Liam Baker has claimed his own pioneering slice of Olympiad glory.

The third-year mathematics and applied mathematics student became the first South African to have a problem proposal selected for inclusion in the International Mathematics Olympiad (IMO), when his functional equation was one of six used at the 2012 edition of the competition for the sharpest high-school mathematics brains in the world. All 100 participating countries submit problem proposals, and a series of committees hand-pick the six most "original and elegant" submissions, as UCT's Professor John Webb of the Department of Mathematics and Applied Mathematics describes.

Webb says that having a problem accepted by the IMO is "very difficult" (not to mention hitting the mark at the first attempt, as Baker has). Submissions need to be "both new and interesting, with a solution that requires original thinking and mathematical creativity," explains Webb.

Baker, who plans to pursue a mathematical academic career, says he had all but forgotten about his submission until he heard on the second day of the competition - held in Argentina in early July - that his problem was being used.

"For the next few days I was pretty much over the moon about it," says Baker, himself a former IMO medallist. For those not afraid of a challenge, Baker's problem is as follows: