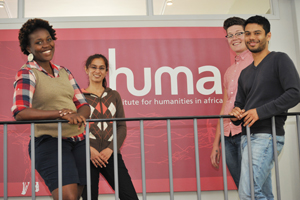 In a milestone step, UCT's Institute for Humanities in Africa (HUMA) has recruited its first doctoral researchers.

In his research, Justin Brown, a Capetonian who studied literature, history and linguistics at UCT and holds a postgraduate certificate in education, will explore mother tongue/native language issues in South Africa, and the various complexities attached to these issues. His research forms part of HUMA's theme On Being Human, which explores how language and communication are fundamental aspects of what it means to be human.

Camminga completed her undergraduate and honours degrees at Rhodes University, before untertaking a master's at the Centre for Interdisciplinary Gender Studies (CIGS), at the University of Leeds, on a Chevening Scholarship. Her PhD research will focus on how transgender identity functions in South Africa, and how people from the continent access the country in order to find a perceived safety in their identity within its borders.

Chisala is a Malawian lawyer who holds a master's degree in human rights and democratisation from the Centre for Human Rights, and a graduate certificate in women's and gender studies from the University of Memphis. Having worked as a researcher, concentrating on sexual offences and HIV/AIDS and the challenges they pose for magistrates, her research fascination is the intersection between HIV/AIDS and the law, and her current research focuses on the recent attempt to legislate the pandemic in Malawi.

Goga, from Durban, completed her master's in the political and international studies department at Rhodes University. Her doctoral research will centre around Muslim subjectivities in South Africa, with a focus on wealth accumulation and the ways in which the display of wealth and meanings around wealth relate to religiosity and moral goodness. Her research falls into HUMA's broader theme of Circuits of Consumption.

"Our doctoral programme occupies a central place at HUMA - it's at the heart of our efforts to contribute to the next academic generation," she says. "I am thrilled to be working with four talented, lively and intellectually curious doc fellows who have also committed themselves to playing an active part in shaping HUMA's future."