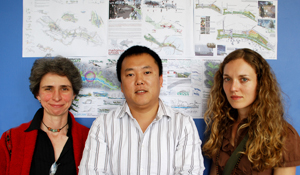 No fewer than three UCT students currently doing their master's in landscape architecture placed in the top four of an international competition to redesign a portion of the Nairobi River front running through the centre of Nairobi.

The students were three of the five from UCT who entered the competition.

Competitors were called on to provide innovative solutions to the challenges facing cities and the planning of rivers that flow through them.

The students' projects were praised for the high quality of the landscape architectural concepts, the level of innovation, the depth of ecological aspects and the feasibility of the overall projects.

The winning entry, from UCT's Ke Lu and titled Reincarnation Landscape, sought to reinvigorate the river as a healthy, natural system and to design it so that natural systems associated with the project become powerfully visible and apparent to people engaging with the river. Lu pocketed US$1 000 in prize money.

Julia McLachlan was awarded a special prize for the most environmentally responsive design for her Flowing waters: Cultural and knowledge streams. She received $500.

Five international landscape architects judged the entries. The awards ceremony was held at the International Federation of Landscape Architects Africa Symposium during the first week of October in Nairobi, Kenya.