Researchers the toast of UCT 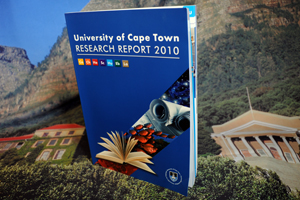 The year 2010 was a busy one for UCT researchers, as reported at a recent function hosted by deputy vice-chancellor Professor Danie Visser and the Research Office.

Firstly, the Research Report 2010 chronicled some of the year's highlights, including UCT's standing as the country's top producer of accredited research publications. In turn, the vice-chancellor, Dr Max Price, drew attention to other landmark achievements, such as the growth in the university's research income to R760 million and a 20% jump in the number of research contracts. (Thanks in no small part to the hard work of the university's researchers, they both were at pains to point out.)

Dr Albert van Jaarsveld, president and CEO of the National Research Foundation, also spoke of the organisation's continued efforts to provide the best possible support to the country's researchers. And guest speaker, Dr Lee McIntyre, research fellow at the Centre for Philosophy and History of Science at Boston University, talked of how the natural sciences can be applied to the study of the world's social problems.