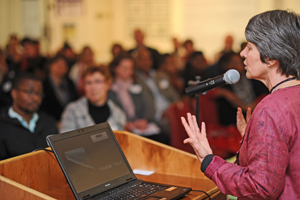 Win-win outreach: Barbara Schmid addresses a mixed audience of students, scholars and newly-recruited community partners at the launch of the Knowledge Co-op.

A fourth-year student in the Department of Mechanical Engineering, it was Mazwai who was asked to help a crèche in the high-crime, working-class community of Lavender Hill identify suitable material - and a design - for a fence.

Not only did Mazwai have to muster his engineering know-how, but he also had to learn a lot about the community, if only to make sure the crèche's fence wouldn't be pinched again. (In the end, he decided on high-density polyethylene - strong and secure enough for a fence, but of little resale value.)

Unlike many other students who volunteer for outreach programmes around campus, Mazwai and supervisor Professor Rob Knutsen had instead been recruited by the UCT Knowledge Co-op.

As reflected in some of the plaques around campus and the multi-million rand research agreements the university regularly procures, UCT is grateful not to be short of illustrious corporate and industry partners.

But, as some have observed, there are many other opportunities to forge partnerships. These are with the many civil organisations and NGOs that have ready access to local communities; communities that UCT has committed itself to support - as befits a university in Africa - but not always to the desired extent.

And these organisations don't always have access to lots of funding or to the country's research community.

Enter the UCT Knowledge Co-op. This two-year project, funded by the Vice-Chancellor's Strategic Fund, hosted by the Institutional Planning Department and modelled on the 'Science Shop' concept developed in Europe in the 1970s, sets out to provide structure and support to the university's social responsiveness involvement with local communities and the organisations that champion UCT's causes.

"The university always has to be asking questions about its identity," said Professor Crain Soudien, deputy vice-chancellor responsible for transformation, at the Knowledge Co-op's recent launch. "And what we are seeing from this project is what it means to be a university here, in this part of the world."

On a bread-and-butter basis, the UCT Knowledge Co-op allows such community groups to approach the university with proposals and requests for joint projects. The office, staffed by Barbara Schmid, in turn approaches departments to identify students and staff who can lend a hand.

But these projects are run on a shoestring. So, Schmid emphasises, by and large they will be based on work the students and academics are already doing, and so are easy to mesh with the needs of the outside partners. As they were in the case of Mazwai's contribution. And in the case of the psychology students who conducted an analysis of exit strategies for sex workers, data used by the Embrace Dignity Campaign, the national initiative led by former deputy minister of health Nozizwe Madlala-Routledge.

The Co-op also supports the work of the Department of Social Anthropology with Eastern Cape residents who, during their tuberculosis treatment in Khayelitsha, are motivated by the idea of 'going home'. (That work provided the inspiration for the next research project of the department's Dr Helen MacDonald.)

These were the examples showcased at the Co-op's belated launch in August, a year after it kicked off its work in 2010. More projects are nearing completion, and many more are waiting in the wings.

It's a win-win arrangement, argues Schmid. Communities and organisations can tap into the expertise and resources available at UCT, and the university's scholars and students get to identify new avenues and outlets for their work.

"The UCT Knowledge Co-op enhances the university's social responsiveness," says Schmid. "And the new thing about the Knowledge Co-op is that the initiative comes from outside."

It also helps put to rest the notion of universities as ivory towers, a theme addressed at the launch by both the vice-chancellor, Dr Max Price, and the deputy vice-chancellor for research, Professor Danie Visser. Universities must be engaged with the communities that surround them, both agreed.

"Our core business is to be useful," said Price, "to both global and local communities."

For now, the UCT Knowledge Co-op is a two-year pilot project, designed to test the waters. Signs are that it could be around for a while.