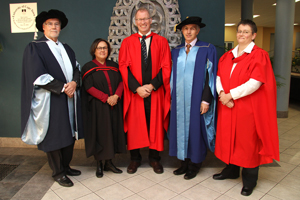 It was an inaugural lecture with a difference.

When he delivered his talk, Music of Health for All, on 24 August, Steve Reid, professor of primary health care, tapped into his other passion: music. Not only did he use music as an analogy for his theme, but also played the piano and even got the audience to take part in the performance - all to underscore his message.

Central to his argument was the "woeful" state of primary health care in South Africa, which, he says, in his view, continues to get worse. This while other middle-income countries such as Brazil and Thailand have improved on all their health status indicators, and are well on target to reaching the Millennium Development Goals (MDGs) of the United Nations.

According to Reid, South Africa has the means, the resources, the knowledge and the understanding to prevent, cure or lessen much of the country's burden of disease. But it founders on some basic principles of social justice and solidarity, and the collective will to actually make the necessary changes.

"In the context of a constitution that states that access to health care is a human right, this is quite unacceptable. Compared to the general standard of our clinical method with the individual patient, it is atrocious," he noted.

When it comes to sickness, Reid explained that everyone falls into the "population at risk" category. So health practitioners should extend their work beyond the patient currently in the sick bed to the person who may fill the same bed in the future.

"We need to act in this population-at-risk area, proactively identifying those who are at greatest risk and providing them with access to prevention strategies, access to diagnosis, access to care when it is needed as soon as possible, and access to rehabilitation and follow-up when it is called for. It's what I call Community Engagement, which is also described as Community-Oriented Primary Care."

If music is a collaborative act, so too is participation a central component of primary health care, as proven in Brazil, Reid argued. Brazil, he explained, has implemented a system of family health teams consisting of a doctor, a nurse, an assistant nurse and between six and nine community health workers, with each team responsible for 3 000 to 4 000 people.

"We cannot achieve any progress in health without people taking responsibility for their own health, participating in their own healing in partnership with professionals - through a balanced diet, exercise and avoiding high risk or unhealthy habits, for example - and at a collective level through community participation."

Borrowing again from music, Reid suggested that South African healthcare should be like jazz icon Abdullah Ibrahim's compositions - not just excellent, but also accessible to all.

"Other developing countries have shown that it is possible to reverse the trends towards greater inequality, and to actually achieve the MDGs, through courageous leadership, effective management and civil participation around a common vision. This is what the National Health Insurance, announced by the Minister of Health recently, sets out to do. And it deserves the full support of all of us."