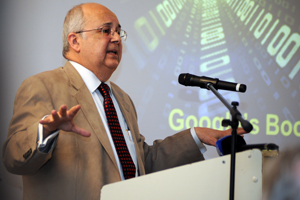 Cusp of a revolution: Prof Ismail Serageldin, director of Egypt's Bibliotheca Alexandrina, spoke on the digital future at the Vice-Chancellor's Open Lecture.

Information is being shaped by extraodinary advances in technology, says library director

Professor Ismail Serageldin's vision of a very-near future would chill a technophobe to the bone.

In his Vice-Chancellor's Open Lecture, titled The knowledge revolution and the university of tomorrow, and delivered at UCT on 25 July, Serageldin described a world that is far removed from the one in which the Ancient Library of Alexandria flourished - the high-tech, ultra-modern reincarnation of which, the Bibliotheca Alexandrina in Egypt, he now directs. It is a future, instead, spawned by exponential advances in technology, most notably the internet.

"I believe that we're now on the cusp of a profound knowledge revolution, in the very structure of knowledge," he said. "It's the biggest thing since the invention of writing."

Serageldin spoke of changes to the way humans create, perceive and access knowledge. No longer, for example, will knowledge be constrained in a codex, the modern format of books, sheets bound together between a cover, words almost set in stone (until the next edition, at least). Instead, in this age of e-readers, iPads and Wikipedia, texts will constantly change and be updated.

Serageldin foretold of a semantic web - one step up from our current Web 2.0 - in which machines rather than humans will unpack the meaning of information, and perform tasks on behalf of their human users. (Only in pure maths and philosophy, he suggests, will humans have the upper hand over machines.) Image and text will eclipse the past reign of text only, Serageldin said - the human brain, after all, does better at processing visual information.

A new mathematics, perhaps only 40 years away, will have to be forged to describe the complexity and chaos of systems - such as weather patterns - that scholars and computer scientists alike are now struggling to grasp and pin down. And forget about silos; the boundaries between disciplines will be blurred at best, and pluri-disciplinarity will be the order of tomorrow.

Gone, too - bibliophiles may want to hold on to something here - will be books as we know them. As already epitomised by the 'bookless' engineering library at the University of Texas in San Antonio in the US, where every book and journal in its on-site collection is only (yes, only) available online. (Serageldin illustrates this with a picture of a bank of empty shelves in the library.)

Not surprisingly, all this will change the way universities operate and the way students learn, said Serageldin. Continuous learning will take over from a once-off stint at a university; there will be a rise, rather, in self learning, distance learning, lifelong learning, and part-time students. And many kinds of institutions will have to offer this broad-based schooling.

But even in this open market of institutions, centres of excellence will be required, especially in developing countries, said Serageldin. "[Centres of excellence] make all the difference between uniform mediocrity and the ability to transform a society and go forward."

So hold on to your hats, he advised.

"The change is happening with incredible speed," he closed. "It's the dawn of a new age, and we must embrace it."

But while frightening for some, not all saw Serageldin's lecture as a cautionary tale.

"I think what Professor Serageldin talks about [is] that one of the roles of libraries now is to filter," said Joan Rapp, soon-departing executive director of UCT Libraries, "to find out what can be appropriate for learning and young people and universities. And I think that's as an exciting future for libraries as the past has been."

(Download the pod cast or view the video here.)