Threats to academic freedom since 9/11 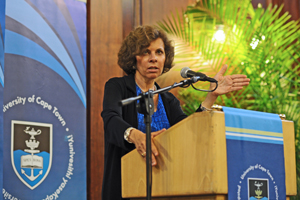 On the wrong track: Prof Nadine Strossen drew comparisons between threats to academic freedom in the US and South Africa, in her TB Davie Memorial Lecture.

The USA Patriot Act remains a thorn in the side of activists and academics in the US.

This according to Professor Nadine Strossen of the New York Law School in the US, who delivered her 2011 TB Davie Memorial Lecture, titled Post-9/11Threats to Academic Freedom, at UCT on 4 August.

The USA Patriot Act (aka the Uniting and Strengthening America by Providing Appropriate Tools Required to Intercept and Obstruct Terrorism Act of 2001) was hurried through the US Senate following the September 11 attacks that year. And it's a piece of sometimes sweeping legislation that Strossen's often had to butt heads with in her capacity as former president and current member of the American Civil Liberties Union (ACLU).

An organisation dedicated to defending individual rights and liberties in the US, the ACLU often had to oppose government decrees made under the Patriot Act. For example, when it represented Professor Adam Habib, the University of Johannesburg deputy vice-chancellor and outspoken critic of the US wars in Iraq and Afghanistan, in a lawsuit against the US government (both under Bush and Obama). Habib was repeatedly denied visas for scholarly visits to the US on the grounds of 'ideological exclusion'. (Only in 2010, after a three-year suit, did the US secretary of State, Hillary Clinton, finally end Habib's exclusion.)

In this case, as it did in the barring of Professor Tariq Ramadan of the University of Oxford, the UCLA argued that the Patriot Act and ideological exclusion violated Americans' First Amendment right to hear constitutionally protected speech by denying foreign scholars, artists, politicians and others entry to the US, explained Strossen in her lecture.

This government expansion of power and constriction of individual rights, in the name of the War on Terror, was the "single most important, overarching challenge to human rights" in the US over the past decade, she said. Ever bipartisan, the ACLU even crossed swords with what were assumed to be friends rather than foes.

"Unfortunately, though, the Obama administration has pursued too many other policies that are claimed to be essential to the war on terror, but actually functions as a war on academic and intellectual freedom," Strossen said.

There are lessons here for academics in South Africa, particularly in the light of the much-vilified Protection of Information Bill that the South African government is attempting to pass into the law books.

Taking her cue from a recent essay, The Prevention of Scholarship Bill (www.sacsis.org.za/site/article/686.1), by Professor Jane Duncan of Rhodes University, Strossen urged academics to speak up and out.

"Professor Duncan's critique of the bill rings all too familiar in terms of US government policy, vesting undue power in the executive branch of government to enforce an overbroad concept of national security and state secrets that stifles the acquisition and dissemination of vital information and ideas," she said. "Even more disturbing than the government suppression that Professor Duncan describes, is her conclusion that some universities here aren't resisting it with sufficient vigour."

If Duncan is correct, her words should serve as a rallying cry for any member of the South African academic community who has not thought to defend academic freedom, said Strossen.