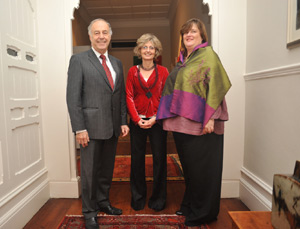 A three-day meeting at UCT on the contested politics of 'culture' in July had all the markings of your typical international scholarly gathering - papers were presented, questions were posed, discussions were had, email addresses were swapped. But, more than that, the occasion also marked UCT's debut as host of a Worldwide Universities Network (WUN) event.

This since becoming, in 2009, the first African institution to join the association of (now) 16 research-intensive universities - of similar size and strength and with common interests - spanning (now) five continents.

One of those interests is addressing issues of global significance under what the WUN has identified as four 'Global Challenges'. These challenges cover climate change, the globalisation of higher education and research, culture and, the newest of the four, global public health.

"Its key objectives are aligned with UCT's own strategic vision, and we believe that our membership of WUN will help extend our partnership profile and enhance our goal of internationalisation with an Afropolitan niche,' said then deputy vice-chancellor Professor Jo Beall when UCT joined the network.

In July, it fell to the Institute of Humanities in Africa (HUMA) to stage UCT's first meeting of WUN delegates. Titled Uses and Abuses of Culture, the gathering aimed, to identify, among other things, points of intellectual convergence as the basis of possible future collaborations.

Which it certainly did.

While culture as an academic interest has generally been thought to be the exclusive turf of social scientists and those in the humanities, the meeting also attracted representatives from the natural sciences, public health and law departments at UCT, in addition to delegates from eight other WUN institutions.

That spread of disciplines under one roof may not be unique, but it is perhaps "unusual", believes HUMA director and meeting host, Professor Deborah Posel. "What participants across this range of fields of study and areas of expertise discovered is their shared interest in researching something they call culture, even if they don't necessarily mean the same thing by it," says Posel. "So conversations about culture become a kind of interdisciplinary glue."

Bringing people together was also a theme at the launch of the meeting, hosted by the vice-chancellor, Dr Max Price, in his capacity as WUN board member, at his residence at Glenara. While, in name, 'worldwide', the WUN does not yet include institutions from, South America for example, or other parts of Africa, Price pointed out. "I hope that the meeting also recognises the need that, if this is about culture, and culture change and globalisation, that it is not a project we will be able to achieve without bringing in partners from other parts of the world."

Professor John Hearn, deputy vice-chancellor for internationalisation at the University of Sydney and WUN chief executive, echoed those sentiments, and reported on the WUN's discussions with possible partners in Latin America and East Africa. There will be challenges in identifying suitable members but UCT, especially, would be key for forays in the rest of Africa, said Hearn.

"I'm absolutely with you in terms of how we might build a more effective engagement in Africa, and I think that depends on Cape Town, in terms of being a nucleus for what we do."