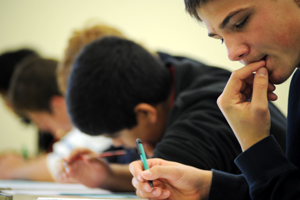 Vice-chancellor Dr Max Price and the director of UCT's Schools Development Unit, Dr Jonathan Clark, penned this article on the crisis in schools for Leader.co.za. This was in response to the nine key challenges facing SA, as identified by Trevor Manuel and the National Planning Commission. Though the authors acknowledge that historic and endemic under-funding have contributed to the poor performance of township and rural schools, they ask why our poorer neighbours manage to outperform us.

It is important to acknowledge that there is a multitude of causes that have contributed to the failure of public schools, not least of which is an all-pervasive set of societal factors. Children who are hungry, or whose lives are challenged daily by domestic or community violence, or whose motivation for getting a good education is undermined by their observations that high school graduates are generally unemployed, or whose overcrowded home environment makes studying particularly difficult - these societal factors are important, but there is little the education system can do to alter those in the short or medium term.

That said, we believe that factors internal to the education system carry the major responsibility for the schooling crisis and merit particular interventions, because this can raise the quality of educational provision to black children in this country. In this brief response we focus on:

What, then, can be done?

Turning first to the issue of curriculum, the attempted implementation of outcomes-based education has been a particular failure. It may well be that the revised grade and subject-specific curriculum and assessment plans (CAPS) are an attempt to do just that - implement OBE; however, an unrealistic implementation timeframe and inadequate support programme leaves us worried that these latest reforms will also falter One understands the pressure to deliver curricula fixes sooner rather than later, in view of the tragedy of losing yet another cohort of school leavers - but we will compromise much more and over many more years if we don't finally do it properly. We should rather address the 'lost generation' (who we have failed over the last decade) with specially designed and dedicated programmes to equip them for the world of work, while taking the time required to design and implement the new CAPS properly. This will take time, firstly, because of all the preparatory steps required, such as getting agreement on content and approach; multiple iterations and reviews in the process of writing the curriculum statements; development or retraining of teachers; and the writing, reviewing, publishing and supply of textbooks.

Secondly, the unreliable provision of teaching and learning materials says much about the efficacy of the educational bureaucracy in general, and the continuing failure of the State's provisioning systems in particular. At a recent meeting in the Cape Metropole, a principal of a township primary school made an emotional appeal to the education officials present (including his Circuit Team Manager) because Foundation Phase workbooks were not delivered - as promised - before the beginning of the school year, but only in May. It is important to note that this took place in a province which has one of the best-functioning educational bureaucracies in the country. Explanations and excuses abound, but this far on from 1994 it is simply unacceptable that the State is unable to set up and run more effective provisioning systems. The failure to deliver such pivotal resources also impacts hugely on the morale of teachers and learners. If the Provincial Education Departments cannot get this right themselves, they should outsource the logistics to the private or NGO sector.

The third factor is the broader inability or failure of the Education Departments to deliver on their core functions - whether this be the supply of learning materials, the provision of libraries or toilets, the repair of windows and leaking roofs, the maintenance of desks and infrastructure, the rapid filling of vacant posts and efficient handling of disciplinary cases, or the support of teacher development. This failure not only compromises the functioning of the schools; it also compromises the relationship between the State (as represented by the educational bureaucracy) on the one hand, and its employees (i.e. the teachers) on the other, because of the interdependence between accountability and support. When the State fails to deliver, its ability to demand accountability of principals and teachers is undermined.

This takes us to the fourth internal factor: accountability and the balance of power. Holding teachers to account is proving no easy task. As alluded to in the Diagnostic Report, late-coming, absenteeism and an inability to enact the basic functions of teaching are endemic in many South African schools. The behaviour of some teachers in many township secondary schools verges on the anarchic. How do we make sense of this ongoing crisis of authority, which pervades all levels of our education system? And what can be done?

Schools as sites of struggle

The destruction of relations of authority, which was one of the consequences of schools becoming 'sites of struggle' in the last two decades of apartheid rule, has had the most terrible consequences. Attempts to reconstruct accountability systems and external controls have been further undermined by the power dynamics at play between a seemingly all-powerful teachers' union (SADTU) and the State. Moreover, SADTU's influence in the promotion and appointment of senior staff and principals who are or were union members creates an ongoing conflict of interest for those in management positions.

Thus the resolution of the crisis in authority and management in our schools system requires government to restore political authority over schools in ways that will ensure that teachers and principals can be held to account.

Finally, there is overwhelming evidence that many teachers are ill-prepared for their task - in many areas, ranging from subject content knowledge to pedagogical methods and classroom management skills. There are understandable historical reasons for this, and the teachers themselves are usually not to blame. But the problem is pervasive and crippling; and we have no choice but to accept that a significant number of the existing teaching corps are the only agents of change that we have. Therefore we need to do everything in our power to build teachers' capacity to teach better, as well as principals' management capacities. Higher education institutions can play a critical role in this if teachers are willing and funding is made available.

In closing: with the experience of almost two decades behind us we must now take the long view, and accept once and for all that there are no quick fixes. Raising the quality of education in this country will take a generation - but if set on the right path, and with the necessary political will, we can produce steady, incremental improvements.

There is reason for hope. For there are remarkable examples of schools serving poor communities which face all the same circumstantial and historical odds against success as every other poor school, and yet they can and do work. And we know the ingredients of their success: they include credible, visionary and ethical leadership; strong management and internal accountability processes; detailed operational plans; commitment to staff development; and a focus on building a culture of teaching and learning. Perhaps most important of all, our schools need the mindset of success.