Graduate and family psyched about win 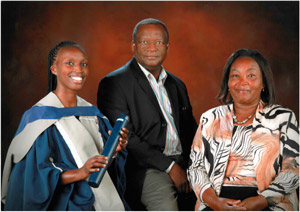 Dr Catherine Kariuki, who recently completed her MMed in psychiatry at UCT, has won the Novartis Medal as the best clinical candidate in the 2010 College of Psychiatrists of South Africa part II exam. Kariuki received the award at a graduation ceremony in Johannesburg in May.

That made mom and dad - a nurse and a forensic-pathologist-turned-psychiatrist, respectively - very proud. As can be seen in the family portrait shot especially for the occasion.

The pull to medicine was strong for Kariuki. "I was always going to do medicine; I grew up watching Dad." she says. (Funnily enough, her father initially discouraged her from a career in medicine; it's a hard life, he cautioned.)

Kariuki now hopes to go into practice with her father. There's one hiccup, though - she resides and wants to stay in Cape Town, while he's based in Pretoria. But a compromise has been struck; she'll fly up for occasional locum work in his practice.