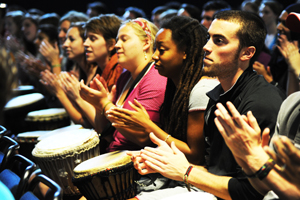 Welcome to Africa: International students participate in an African drumming session at UCT.

The relationship between South African universities and sister institutions across Africa has been topical for much of the past decade, writes deputy vice-chancellor Professor Thandabantu Nhlapo. At the University of Cape Town the matter has recently been thrown into sharp relief by the debates surrounding the Centre for African Studies and the proposal to form a new school that would provide a different platform for the study of Africa. A question that has been asked often is whether these debates have implications for, or may be able to draw from, UCT's declared goal to position itself as an Afropolitan university.

The Afropolitan vision is simple enough to describe: it is UCT's aspiration to embrace more meaningfully and more visibly our African identity and to play a significant continental role as one of Africa's leading institutions. We believe that we are well-prepared for such a role.

Over the years our scholarly engagements on the continent have been many and varied, including several hundred research collaborations that range from informal research partnerships to structured relationships within which joint work is formalised.

Many of these relationships are located in high-profile UCT flagship units and institutes, while others represent work that is quietly going on at departmental or individual level. This includes joint research and publications, external examinerships, student exchanges and capacity- building programmes in curriculum design.

A significant aspect of this involvement is direct capacity building for the region and for the continent, generally through the large numbers of SADC students who come through UCT (at the same fees as South Africans, in terms of the SADC Protocol), and through dedicated staff development programmes such as the University Science, Humanities, Law and Engineering Partnerships in Africa, better known as USHEPiA (see article on page 12).

The Afropolitan ideal aims to recognise this work, to support it and to give it more prominence, with the ultimate aim of consolidating UCT's place as an intellectual meeting point between South Africa, the rest of Africa, and the world.

But since this strategic goal was approved by Council in 2009, it has become increasingly clear that its implementation and its implications for UCT will be multi-layered and complex.

Viewed in this way, then, Afropolitanism at UCT stands on several pillars:

As we reflect on Africa Day across the university I am confident that we will deepen our understanding of the total Afropolitan idea and its implications for UCT.

Every aspect of UCT's academic and operational life is touched by Afropolitanism. PASS departments have raised questions as to what Afropolitanism means for them.

The Human Resources Department will have it on their radar screen when they plan recruitment, appointment and remuneration policies; Student Affairs will have it in mind when they ponder their student housing and health offerings; ICTS will do the same in considering their delivery capacity, as will Properties and Services in thinking about physical plant, including short- and long-term housing. So will the Finance Department, over a range of money and sustainability matters. The Institutional Planning department, the admissions and recruitment people, the Postgraduate Funding Office and the UCT Libraries will reflect on the possibilities opened up by this approach, and of course IAPO will be central to the implementation. The Development and Alumni Department will have an interest in identifying funding opportunities for the project.

Many of these reflections will inevitably come back to the issue of resources.

As a final word, it should be acknowledged that, in the greater scheme of things, we cannot do this alone. It is crucial to engage the Department of Higher Education and Training, the Department of Science and Technology, the Department of Home Affairs, and regional and continental bodies such as the Southern African Regional Universities Association (SARUA) and the Association of African Universities (AAU), who themselves are now quite alive to the need for universities to use continental partnerships as a real driver for the development, not only of the higher education sector but of African populations as a whole.