Space and the cosmos, as seen from Africa 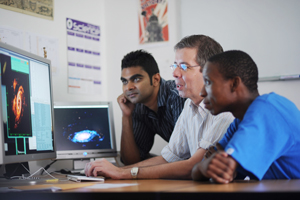 Many postgraduate students from across Africa are expanding their horizons through the UCT-hosted National Astrophysics and Space Science Programme (NASSP).

The National Astrophysics and Space Science programme (NASSP), a South African inter-academic programme hosted by UCT through its Astrophysics, Cosmology and Gravity Centre, has many students and graduates who hail from Africa.

The Department of Astronomy is also strongly involved in postgraduate supervision of students from the African partner countries in the South African Square Kilometre Array (SKA) bid, contributing to the Human capacity Development programme of the South African SKA project.

A recent coup for the UCT Astrophysics, Cosmology and Gravity Research Centre is that four key science proposals were among ten successful bids for the 43 000 hours of observing time allocated to radio astronomers from Africa and around the world on South Africa's MeerKAT telescope. This announcement was made in November last year.

A precursor telescope to the SKA, which will be the largest radio telescope in the world (South Africa and Australia are both bidding to host this multi-billion-euro facility), the MeerKAT telescope consists of 64 13.5m diameter Gregorian offset dishes. A MeerKAT engineering test bed of seven dishes (KAT-7) is already complete on the potential SKA site near Carnarvon in the Northern Cape Province. This will contribute to the development of technology required for SKA.

Radio astronomy is the study of celestial objects that emit radio waves. These objects could be galaxies but could also be exploding stars. Radio telescopes like MeerKAT harness these faint signals, allowing astronomers to probe the 'Dark Ages' of the universe.

The four UCT proposals, or key science projects, were among 21 involving more than 500 radio astronomers around the globe (including 59 astronomers from South Africa) following the invitation from the MeerKAT project issued in October last year. The other winning proposals were from Australia, the UK, India, Germany, and the Netherlands. Projects were reviewed and rated on the basis of their scientific merit, and technical and operational feasibility.

Each proposal has been awarded a substantial tranche of telescope time during the first five years of MeerKAT's operation (the telescope comes on stream in 2015). Together the UCT projects (led by ACGC scientists) will account for 40% of the observation time allocated.

Drs Sarah Blyth and Benne Holwerda, together with a colleague from the US, will lead the Deep HI Field project, an ultra-deep survey of neutral hydrogen gas in the early Universe. SARChI Chair in Radio Astronomy Professor Erwin de Blok's Mhongoose study will focus on deep observations of 30 nearby galaxies (25 times deeper than previous observations). The Mightee project, by Dr Kurt van der Heyden and Matt Jarvis will lead the International GigaHertz Tiered Extragalactic Explorations Survey. In their ThunderKAT project, Professor Patrick Woudt and Professor Rob Fender of the University of Southampton in the UK will lead the hunt for dynamic and explosive radio transients.