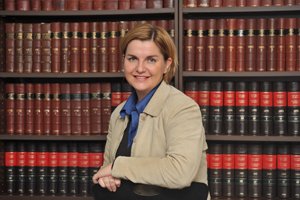 Prof Hanri Mostert is driving the establishment of the Centre for Comparative Law in Africa.

The new Chair and Centre will promote the comparative study of law on the African continent, build research and teaching capacity, and support the faculty's Afropolitan and internationalisation initiatives.

The faculty's research director, Professor Hanri Mostert, who is driving this initiative, says the CCLA will devise "fresh, home-grown, and intellectually rigorous" responses to many social problems facing the continent today, including problems of democracy, governance, poverty, HIV/AIDS, land distribution, food security and other challenges.

"The centre will foster rigorous scholarly engagement, supporting the the idea of the Africanisation of the law, and create a broader receptive base, both in Africa and abroad, for research emanating from the UCT Faculty of Law," says Mostert.

"It will forge links between scholars in and beyond Africa, attracting the foremost scholars in comparative law to UCT. As such, it will serve as a gateway to the multidimensional and multijurisdictional terrain of law in Africa. The centre will also contribute to the creation of better opportunities for African scholars as academic staff at UCT and allow the African worldview to influence the manner and content of our teaching."

The initiative also represents an important response by the law faculty to popular, polemical debate about the Africanisation of the law and will create the infrastructure for engaging with this debate in rigorous and critical scholarship, which is a characteristic of the faculty.

It is envisaged that the Chair will be filled by an internationally renowned comparative law specialist. The post is currently being advertised.

The introduction of a Chair of Comparative Law in Africa is the first step in developing UCT law academics' expertise in (and influence on), African law in all African regions and legal systems.

"In this sense, the initiative responds to UCT's strategic goal of positioning the university as an intellectual leader in Africa and strengthening the university's international research profile by fostering engaging and significant research," she says.

The centre will build on the existing collaborations and networks established by the faculty over many years. In the past two years, the faculty has vigorously pursued exchange agreements with other law schools worldwide, but particularly in Africa.

Professor Evance Kalula, the faculty's deputy dean responsible for internationalisation and outreach, said that of the 14 international collaborative link agreements, including those with leading universities in North America, the UK, Europe, China and India, a number are with African law schools. Among these are the agreements with faculties of law at the Eduardo Mondlane University in Maputo, Mozambique; the National University of Rwanda; the University of Dar es Salaam; and the University of Namibia.

The agreements cover research and staff and student collaborations. In addition to the benefits of the University Science Humanities and Engineering Partnerships in Africa collaboration, of which the University of Dar es Salaam is a partner, scores of LLM and doctoral students from UCT's partner faculties are benefitting from these exchange agreements.