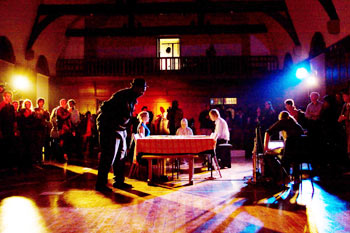 Jazz, film, public interventions and a groupthink called Delicious Sensations were the highlights of a weekend-long edutainment event presented by UCT's Gordon Institute for Performing and Creative Arts (GIPCA) at the Hiddingh Campus from 13 to 15 May.

The Mike Rossi Quartet opened the event, titled the names we give, with a performance of New Orleans- and Cape Town-style jazz, but the music line-up also included choral and opera performances, and a Saturday night party featuring a host of DJs.

Drama events included a rehearsal performance of Egon Wolff's Flores de Papel (Paper Flowers) and a number of readings. Films featured were Djibril Diop Mambety's Hyenas and Khalo Matabane's Story of My Beautiful Country, and dance theatre was represented by Fractography - the untold story of Napoleon and Josephine.

"The names we give to concepts, things and people put them in a specific headspace," explains GIPCA director, Jay Pather. "This in turn influences our interactions with them, and sows the seeds for selective, sometimes myopic, viewing."