Full steam ahead for task team 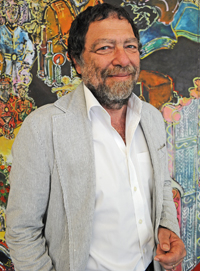 More to come: Prof Ari Sitas, head of the national task team into developing a charter to establish the importance of scholarship in the human and social sciences. The task team will deliver its report to the Department of Higher Education and Training next month.

The task team established by Minister of Higher Education and Training Dr Blade Nzimande to develop a charter for establishing the importance of scholarship in the humananities and social sciences, and led by UCT's Professor Ari Sitas, has completed its fact-finding visits.

Sitas (sociology department) and Dr Sarah Mosoetsa of the University of the Witwatersrand have visited 22 of the country's 23 higher education institutions, interacting with some 1 300 academics and students in the humanities and social sciences. They also ran focus groups with civil society organisations and social movements and recently held a key strategy workshop with 36 experts in the field. A working paper developed by the task team was circulated for comment after the strategic workshop.

UCT's Bianca Tame, also of the sociology department, and co-ordinator of the task team, said the facts gathered address six inter-related areas that affect the broader humanities, facts about the "wellness" and integrity of South African higher education institutions, students and their scholarship, excellence and relevance, the qualities of mind necessary for graduates in the field, and specific problems relating to the subjects taught.

"It has been hard separating fact from fiction and perception from conviction," Tame said.

Sitas is cautiously optimistic about the prospects of a new dispensation.

"The social ecology of what makes good research and teaching in the humanities and social science is very frail at the moment and needs serious enhancement. But we are also facing levels of toxicity that are regrettable... It takes years and years to create something good and it takes an idiot a few hours to destroy it. The task team does not want to be that idiot."

Sitas also addressed a number of misconceptions that Aisha Lorgat, the task team's senior researcher, spent many hours trying to verify, such as funding for the university system - which, contrary to perception, has almost tripled since 1996, Sitas said.

"But the universities have also developed some very expensive habits. Yes, the relevance of our education system is under scrutiny by economic and social actors, but no one denies the importance of deep literacy, critical analysis and cognitive complexity. What people out there worry about, call them the market if you wish, is the actual quality our graduates possess, as opposed to the rhetoric of many of us in the humanities. The thought of 900 students with one lecturer for one subject frightens them, but what frightens them more is that some students pass or fail under those conditions. There is a joke doing the rounds that academia is not the core business of universities any more, and that it should be outsourced."

There is a national and international encounter being planned for the beginning of June and then it will be report-drafting time. By the end of June a report must be handed over to the Department of Higher Education and Training.

While Sitas says he is keen to return to his favourite sociological century (the 17th) and to his "serious obsessions with the musical theory of the Baghdad, Cairo and Cordoba Schools of the 9th to 11th centuries", he foresees plenty of post-task-team work to ensure the recommendations of the charter are implemented.