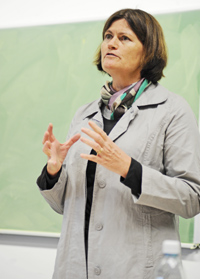 One of the few: Justice Kate O'Regan was one of the few women judges on the Constitutional Court.

O'Regan, a UCT alumna who now serves as an acting judge of appeal on Namibia's Supreme Court, was a guest speaker at a talk hosted by the UCT History and Current Affairs Society in April. At the event, she spoke on the first 15 years of the South African Constitutional Court, but more specifically the make-up of the judiciary.

"The new constitutional system, whereby judges are recommended for appointment by the Judicial Service Commission, is more transparent than the system which existed in the past," she noted. This, she added, is in keeping with the Constitution, which requires that the judiciary reflect broadly the racial and gender composition of society.

Currently there are over 200 judges, of whom approximately 120 are black and 90 are white. The number of women judges remains low, women making up less than a quarter of judges, O'Regan said. The Constitutional Court still has only two female judges out of 11 (the same number it had in 1994), although it now also has eight black judges and three white.

In her address, O'Regan also spoke on the genesis of the Constitutional Court, the processes followed to establish it, and its important role in democracy.