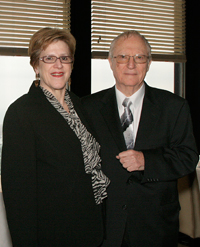 Unstinting support: Recipients of the Vice-Chancellor's Medal in 2011 are alumni and benefactors Henry Blumberg and Prof Marcia Blumberg of the UCT Foundation in Canada.

Long-standing benefactors and directors of the University of Cape Town Foundation in Canada, Henry Blumberg (chairperson) and Professor Marcia Blumberg, are the 2011 recipients of the Vice-Chancellor's Medal for their unstinting support of UCT over the years. The award was made in Toronto recently.

Presenting the award, vice-chancellor Dr Max Price thanked the Blumbergs for their contributions to UCT over the years. He also thanked the foundation's past board members and the staff of Blumberg Segal LLP who played a supporting role in UCT's activities in Canada.

The UCT Foundation was constituted in Toronto in 1993 to raise funds for student bursaries, health sciences and educational outreach projects, and to forge bonds between UCT and Canada. The Blumbergs, both UCT alumni, were instrumental in establishing the foundation, which as a registered charity in Canada makes it tax effective for UCT alumni to donate to their alma mater.

The Blumbergs have hosted many UCT functions and VIPs over the years, always with the university's welfare in mind. For example, visiting South African theatre performances are used as vehicles to raise funds for student bursaries. Of note was a Master's in Drama Scholarship in theatre, performance or applied drama/theatre in HIV/AIDS, awarded to renowned South African theatre playwright and director Mike van Graan.

Funds raised from a theatre evening in 2008 contributed towards the annual Ikhwezi Community Theatre Festival at the Baxter Theatre Centre. This festival has launched the careers of many promising young artists.

The couple has also contributed to the Blumberg Prize for Service to the Student Community. Established in 2007, the Henry & Marcia Bloomberg Prize is an annual award to a student who has worked hard both academically and in service of the wider student community. The Blumbergs were also instrumental in initiating the UCT/York University (Toronto) exchange agreement.