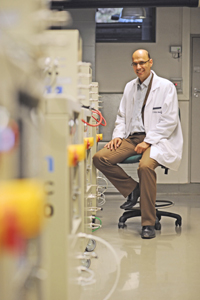 It's all systems go for the UCT-based National Hydrogen Catalysis Competence Centre, aka HySA/Catalysis, now that it has a director. Dr Olaf Conrad officially took the reins in January, and calls his new post - and home - here at UCT, a wish fulfilled.

Until December, Conrad was head of division of the fuel cell department at Next Energy in Oldenburg, Germany. But some clever headhunting by UCT brought him to our shores.

Conrad, who is now responsible for scientific leadership within HySA/ Catalysis, based in the Department of Chemical Engineering, is an internationally renowned expert on polymer electrolyte membrane (PEM) fuel cells, with many years of experience in the development of electrocatalysts and their integration into membrane electrode assembly.

"These are the skills that were absent from the group," said Professor Jack Fletcher, head of the Department of Chemical Engineering and director of the Centre for Catalysis Research at UCT.

Conrad began his scientific career at the University of MÃ¼nster, Germany, completing a doctoral thesis on the topic of high-temperature melt syntheses and the analysis of the crystalline structure of I-III-VI aluminium compounds. Later he completed postdoctoral studies in Finland and the US as a recipient of the Feodor Lynen Research Fellowship at the Alexander von Humboldt Foundation.

In his subsequent position as research chemist at the corporate research division of the Engelhard Corporation (today part of chemical company BASF) in the US, Italy and Japan, he helped develop and launch platinum electrocatalysts for fuel cells.

Asked about the plans for HySA/Catalysis, Conrad mentions firstly that it's a joy to work within an already established infrastructure. "Engineering here [at UCT] is top of the line in infrastructure, competence and academic staff.

"HySA/Catalysis' mandate, in keeping with that of the Department of Science and Technology, is that South Africa should build the competence base to create products that are homegrown, and so bring investment to South Africa by setting up businesses that use our mineral wealth to create higher, value-added opportunities. Human capital development is key."

Conrad adds: "When I started chemistry I hoped that one day I could use it for something that benefits many people. This wish was fulfilled in the opportunity to contribute to solving an energy problem and work in a country that is an emerging market that's come through change, and now wants to make the pursuit of happiness true for all."