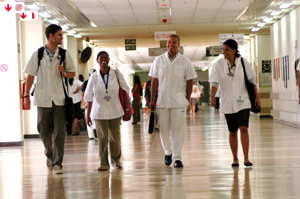 There's good reason UCT's submission for the 2010/2011 Multilingualism Awards of the Pan South African Language Board (PanSALB) ran into a few hundred pages; there was a lot of ground to cover.

But the effort paid off. In March, UCT was named the winner in the education category of the PanSALB Awards, a category that looks at the use and promotion of multilingualism in institutions of learning, including policies and tuition material. To be precise, the award was presented jointly to the Faculties of Health Sciences and Humanities at UCT for the training programmes in Afrikaans and isiXhosa that over the past decade have slowly but surely been incorporated into the formal MBChB curriculum of the Faculty of Health Sciences.

The backbone of this programme has been the Becoming a Doctor course, which spans the second and third years of the curriculum, and which was the brainchild of the designers of the new curriculum, led by Professor Janet Seggie of the Department of Medicine and Dr Nadia Hartman of the Educational Development Unit in the faculty.

It's been a team effort throughout. The Faculty of Health Sciences worked side by side with colleagues in the Faculty of Humanities and the Multilingualism Education Project (MEP) of the Centre for Higher Education Development.

In keeping with the collaborative nature of the work, three UCT scholars travelled to Sandton on 19 March to pick up the trophy - Professor Derek Hellenberg, head of the Division of Family Medicine in the School of Public Health and Family Medicine, and Dr Ian van Rooyen and Dr Mantoa Smouse, both of the School of Languages and Literatures. Their submission to PanSALB gives a lot of back story. In particular it highlights how things get lost in translation when patients and doctors speak to each other in South Africa.

For example, recent research by Associate Professor Ana Deumert, head of linguistics in the Department of English Language and Literature, has shown that patients whose primary language differs from that used in the health system have a poorer understanding of their diagnosis, treatment recommendations and medication than other patients do.

So concerns were bigger than just doctors' bedside manner.

So the Faculty of Health Sciences - with Hellenberg, Smouse, Van Rooyen and others at the helm - has introduced a train of initiatives to fill such gaps since 2003.

The faculty started with the Becoming a Doctor course in 2003 (Phase 1), part and parcel of its new curriculum. That was followed by Phase 2, a semester-long intensive grammar course in isiXhosa in 2008 and Afrikaans in 2011; then Phase 3 (funded by MEP), started in 2009, a four-week special study module in languages and family medicine, where some students actually live with host families in either Afrikaans- or isiXhosa-speaking communities for two and a half weeks. Last year saw the launch of Phase 4, the integration of languages in bedside teaching in year four (the start of the clinical years) of the MBChB programme.

Over the next few years there are also plans to include language learning and assessment into the final two years of the degree.

There've been other initiatives along the way. So, for example, the faculty translated the Department of Internal Medicine's four-CD compilation on clinical skills, until then only available in English, into Afrikaans and isiXhosa. This was also funded by MEP, and the CDs are now available as an open educational resource. (Key role-players in this exercise were Zukile Jama and Thuli Mcanda of the School of Languages and Literatures, UCT's Information and Communication Technology Services, and Sr Rae Nash, who headed the Clinical Skills Laboratory at that time.)

In addition, the work has spawned a series of research projects. Like the survey on the impact of the language courses on graduates in their workplace, and a pilot project on the feasibility of the integrated teaching of family medicine, clinical skills and languages in a clinical facility.

All this, says Associate Professor Mbulungeni Madiba, co-ordinator of MEP, is possible because UCT has put the right foundation in place. Work such as that in the Faculty of Health Sciences springs from UCT's Language Policy, says Madiba, which takes as its starting point the need to prepare students to "participate fully in a multilingual society".

"It's a graduate-ness thing," he says.

To his mind, programmes such as that for the MBChB programme should be duplicated across all UCT's professional degree programmes, notes Madiba. Already MEP, working with the School of Languages and Literatures, has drawn up and run a pilot short course for the Faculty of Law, with a view to incorporating it into the faculty's formal curricula in the near future.

He's often been teased, adds Madiba, that he heads up multilingualism efforts at UCT; the last institution some expected would pay much attention to the issue.

But if the PanSALB award is anything to go by, he notes, UCT is now setting the trend, and others may well soon start mimicking the university's award-quality initiatives.