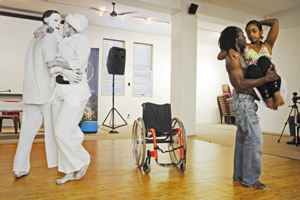 Dancing it up: Members of the Remix Dance Company (from left) Owen Manamela, Mpotseng Shupin, Andile Vellem and Nadine Mckenzie perform at a Month of Transformation event.

A performance that included a dancer in a wheel-chair raised some hard questions.

Such as, should the audience sympathise with the dancer, or should they just have enjoyed the performance like they would any other?

Dance in South Africa remains gender-bound, and rife with stereotypes, and the debate around transformation in performance art requires vigorous investigation, noted Gerard Samuel, director of UCT's School of Dance, at the performance.

"What is dance? Who defines dance models? How is it being performed? Who is watching dance?" Samuel asked at a seminar, Performing Body?, hosted by UCT's Disability Service and Remix Dance Company, and which formed part of UCT's Month of Transformation.

Samuel added that everybody, including people in wheel-chairs, can dance. The challenge, he said, is how the art can be extended to people with disabilities, and made it more inclusive and integrated.

Malcolm Black, who choreographed the performance, said integrated dance is part of contemporary dance, and includes various performing bodies, including dancers with disabilities. It is important to put more focus on integration, he added.

Black said Remix Dance Company has taken a positive step to be incorporated into UCT and is a company in residence at the Baxter Theatre Centre. This affirms an important goal of integrated dance, where differences are not excluded from contemporary dance and mainstream institutions.

"It is important to acknowledge change and difference in the contemporary world," he said.