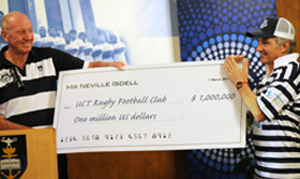 A donation of US$1 million - yes, dollars, not rands - by alumnus Neville Isdell to the Rugby Club has allowed UCT to dust off its long-nursed plans to build a decent rugby stadium.

Isdell, former chairperson and CEO of the Coca-Cola company, and a longstanding, dedicated donor to UCT coffers, made the official announcement of the donation of around R7-million at a function after the UCT-Stellenbosch Varsity Cup clash on 7 March.

The award, he said, was inspired by his rugby-playing days as a student here in the 1960s. (According to records, his game was marked by "speed, aggressiveness and team spirit".)

"I look back on my life and my career, and certainly the time that I spent here at varsity was absolutely pivotal in terms of the person that I became, good or bad. The most meaningful part of that was actually playing rugby."

It is those experiences that urged him to keep in touch with the Rugby Club at UCT. And it's a lesson that the university can learn, he noted.

The Varsity Cup, he added, has upped the stakes for university sport.

That sentiment was echoed by vice-chancellor Dr Max Price. Especially, Price pointed out, in the light of the Ikeys' surprise performance in the competition.

Suddenly the university is attracting more sponsorships, it's benefiting from invaluable marketing mileage through the television broadcast of the competition, and potential students are looking at the university as a top sporting institution as well.

"We do want to be a university that educates all-rounders, and we see the value of sport in the development of students and future leaders," said Price.

UCT has not yet decided on a site for the stadium, reported Price. But, he noted, it will unfortunately not be on campus. (Because of heritage concerns, the rugby fields on Upper Campus cannot be upgraded to house the new stadium.)

But, particularly considering the Varsity Cup, the stadium will be located within range of the university.

UCT has already appointed a project implementation committee which is scouting the surrounding area for options, confirmed John Critien, executive director for properties and services at UCT. The university has also appointed an architect and a quantity surveyor.

The concept is not new, said Critien. "It's based on the premise that for the last 10 or 12 years the university has not really invested in sporting facilities."

The new Kopano soccer turf and the new gym were among the first steps to make up for this shortfall. But the new stadium will be the university's biggest investment yet.

However, more fundraising will be required before any work can begin on the stadium, which will be developed in stages. The first will cost around R12 million.