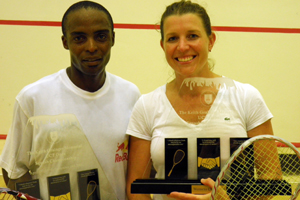 There was some good squash on display at the annual Keith Grainger UCT Squash Open, staged at UCT from 4 to 6 March.

No fewer than 56 players - 40 men and 16 women - took part in the event, staged in memory of the late Keith Grainger, a dedicated student servant of the club until his death from cancer in 2001.

As she did last year, Grainger's sister Natalie, the former world number 5 who announced her retirement from competitive squash in December, again took the women's title. But she had to fight for it, pushed to five sets in the final by a determined SA number 2, Milnay Louw. Grainger finally won a seesaw fifth set by 13-11.

The men's competition had a few surprises in store. In the first semi-final, the national under-23 champion, Thoboki Mohohlo, seeded 5th in the competition and number 15 in South Africa, got the better of top seed and SA number 8 Gary Wheadon by 3-0. In turn, number 2 seed and national 12th seed Zuko Kubukeli, a former chairperson of UCT Squash and erstwhile member of UCT Sports Council, beat the SA number 13, Paul Atkinson, to reach the final.

Kubukeli kept to his winning ways, edging out Mohohlo in what has been described as a classic five-set spectacle.

UCT Squash extends its thanks to the sponsors of the event: the Grainger family, Harrow, SAB and New Balance, who provided generous prizes.