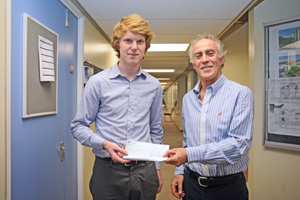 Single Speak: Carl Veller (left) is the winner of this year's Keswick Prize for Lucidity, presented by Prof Dave Kaplan.

Can one put a value on lucidity? Sir Chips Keswick does, which is why he established the annual Keswick Prize for Lucidity, awarded to a third- or fourth-year student in any technical field for writing the most lucid essay on that subject.

Sir John Chippendale Lindley Keswick (who prefers to be called Sir Chips) has only one condition: that the winner of his R5 000 award write him a clear, jargon-free letter of thanks.

This year, the task fell to economics postgraduate Carl Veller, for his essay on the issues facing policymakers.

In handing over the award, Professor Dave Kaplan of UCT's School of Economics noted that although he seldom gave higher than 80% for an essay, Veller had achieved a mark of around 90% for his "clear and succinct" essay. Lucid, in other words.

Sir Chips, a former director of Hambros Bank, is a British businessman and a member of the family that controls Hong Kong company Jardine Matheson.