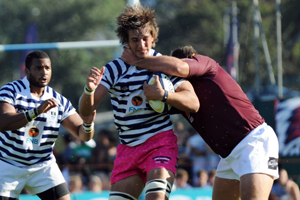 This month SuperSport ran a short report about how more than 40 members of the University of Cape Town Rugby Club - players and staff - spent a hot Saturday at the end of January at Sisters Incorporated, a shelter for abused women and children in Cape Town, sprucing up the gardens, facilities and living areas. According to one media source, staff at the shelter (where men are usually not allowed) were impressed not only by the quality of the men's work but also by their gentleness and kindness.

Unfortunately, that isn't the world we live in. Violence against women is a pervasive problem the world over, and it has become one of the most prominent features of life in post-apartheid South Africa. Many recognise that we have become one of the most violent countries in the world, with murder, femicide and sexual offence rates reaching intolerable levels.

For this reason, this year Varsity Cup officials are raising awareness about violence against women and children, through the Varsity Cup Trust and the Pink Shorts campaign. All eight captains will wear pink shorts in the opening clashes, as will the four Players of the Match in every game thereafter, to draw attention to the rights of women and children to live free from the fear of abuse.

Gender-based violence is often committed in the home and away from public view. The intensely personal nature of these crimes, victims' fear of retaliation, and self-blame at having been victimised are among the chief reasons why women and children choose not to report such offences. Although 54 000 rapes are reported to the police every year, research shows that for every one of these cases, another eight go unreported. Of the cases that are reported, only a few go to trial and even fewer result in conviction. The extent of domestic violence is more difficult to calculate as it is currently not codified as a separate criminal offence in South Africa, but is recorded as "common assault" or "assault with the intent to do grievous bodily harm" which hides the "domestic" nature of these offences. This, coupled with the reluctance of victims to report, is why police often refer to domestic violence as the "dark figure" of national crime statistics.

Yet it is clear that violence against women is deeply embedded in South African society. It cuts across geographic, cultural, linguistic and socioeconomic boundaries, and deprives women of safety and security at the most fundamental level. This trend reflects a context in which coercive and forced sex is tolerated and violence is the norm. Many survivors sustain serious physical injuries, and experience serious psychological and emotional consequences, including fear, anger, shame and depression. In addition, more than 5 million people in South Africa are currently infected with HIV, so women who are sexually victimised face an extremely high risk of contracting HIV themselves.

Domestic abuse takes many forms, including physical violence, psychological abuse and economic abuse, each of which sustains and perpetuates the others. Poverty exacerbates the problem by limiting women's choices and access to assistance (for example from health, social welfare, legal and criminal justice services) and affecting their ability to challenge male violence against them. Besides fear, economic dependence has been cited as the most common reason why women stay with an abusive partner.

Our society overwhelmingly characterises men as the primary breadwinners and places the heavy burden of childcare almost exclusively on women. As such, women find themselves in a position of double vulnerability, since they have greater financial need but have access to fewer resources. This allows men to maintain control over family finances and to withhold essential financial support from their wives as well as their children - or to exploit this need for abusive purposes. Violence against women, then, has severe implications not only for the physical and mental health of the women involved, but also for their families and communities.

Attitudes ranging from simple disinterest to blatant disregard for women's risk of victimisation, especially at the hands of those they know and love, perpetuate the problem. How many of us can honestly say we have never laughed at a sexist joke or stayed silent when a friend made derogatory remarks at a woman's expense? How many of us have sat mute and uneasy when a friend or family member has treated his partner in a way that makes us feel uncomfortable? Or turned a blind eye to sexual harassment on the street?

When strung together, these seemingly benign "incidents" add up to a social culture that encourages violence against women, however subtly. Rape and domestic violence are not committed only by people who are antisocial or pathological. In fact, most offenders are everyday people. You have probably sat next to one at a dinner table, on the train, around a boardroom table– or at a rugby match. You might even have one living in your home.

In a social context in which the fear of crime and violence - and other frightening intrusions by strangers - features so prominently in our lives, it is surprising that we are so silent about violence and other degrading treatment in our own private spaces.

The Gender Health and Justice Research Unit at UCT was founded to help chip away at the problem of violence against women. We were interested to hear that the rugby captains in the Varsity Cup will be wearing pink shorts as a way of raising awareness about the abuse of women and children. To some, the 'men in pink' are powerfully symbolic of the (often silent) concern that men have about violence against women and the critical need for men to become part of the solution. To others, this benevolent act may do little more than raise a few eyebrows.

While 'ordinary' men do get involved in the fight against gender-based violence by supporting women who have been victimised, on the whole men tend to only really engage with these issues after some priming experience, such as witnessing or hearing about violence against a woman or a child they care about. Getting involved means more than taking a pledge: it is a conscious commitment to responding to the way men treat and view women in private and public spaces. It means promoting positive masculinity, where respect for women is seen as 'manly'; where involvement means speaking out, in a public way, against sexism and other forms of degrading treatment against women. It means being aware and sensitive to the discomfort and fear that many women feel every day, for just being women.

With a conscious effort to promote safe and respectful relationships with women, we can start edging our way towards a less vulnerable existence, in which violence is not the norm, and where women no longer need to live in fear.