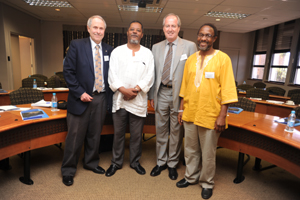 Great debate: Attending the colloquium were (from left) Prof Tom Flanagan of the University of Calgary, Prof Sam Moyo of the AISA, Geoff White of the High Commission of Canada, and and Prof Lungisile Ntsebeza of the NRF.

Aspects of the property rights clause enshrined in the South African constitution may be a significant obstacle to land redistribution in the country.

This argument was debated at a colloquium on 24 and 25 February hosted by UCT's South African Association of Canadian Studies (SAACS) and the NRF Research Chair in Land Reform and Democracy, chaired by Professor Lungisile Ntsebeza.

But the issue is not exclusively South African. In his keynote address, Property Rights in Canada, Professor Tom Flanagan of the University of Calgary outlined the decision not to include property rights in the amendments to the Canadian constitution in 1982 and the land rights of the First Nations - the country's original inhabitants.

Closer to home is The Zimbabwean Experience. This was the title of a presentation by Professor Sam Moyo, director of the African Institute for Agrarian Studies. Like South Africa, property rights are entrenched in Zimbabwe's constitution. But the frustration after two decades of ineffective land reform resulted in the controversial "fast track" programme.

Now, in South Africa, the issue has been receiving increasing attention since the Zuma administration placed rural development among its top five priorities.

"Academics, lawyers and leaders in civil society dealing with land dispossession and land claims all agreed that the land reform programme in South Africa has stalled, with potentially dire consequences for the country," said SAACS chair Professor Ingrid Fiske. "Robust debate put the property clause under the spotlight, though opinions were by no means uniform."