Scrappy but solid win for UCT in Varsity Cup opener 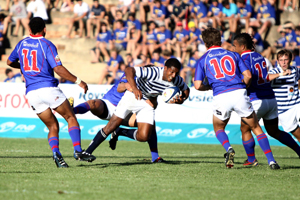 It took them a while to shake off the cobwebs, but FNB UCT, aka the Ikey Tigers, earned a deserved 26-10 win over the University of Free State's FNB Shimlas in the opening 2011 Varsity Cup match, played in front of a sparse crowd at Shimlas Park Bloemfontein.

It was an untidy game much of the time, with too many handling errors and scoring opportunities going to waste. New UCT coach Kevin Foote may also have been worried by the number of penalties - mostly unpunished - that his team conceded.

It took just under 20 minutes, in fact, for the first score - a try for UCT by flank Don Armand after a break through the middle by centre Marcel Brache. Tigers' flyhalf Demetri Catrakilis converted, and a penalty for Shimlas took the score to 7-3 at halftime.

UCT was a little neater, more inventive and pumped up in the second half, while it was Shimlas' turn to give away points. Catrakilis made the Free Staters pay, booting over three penalties without reply, taking the score to 16-3. UCT followed that up with a try by Sabelo Siyakatshana and a second conversion by Catrakilis to make it 23-3.

As is their wont, Shimlas scored a late consolation goal (23-10) before Catrakilis added his fourth penalty of the day to take the final score to 26-10, and his personal tally to 16.

UCT's inside centre, Adrian Kritzinger, will don the Man of the Match's pink shorts - part of the Varsity Cup's campaign against violence against women and children - in UCT's next clash, against North-West University's Pukke in Potchefstroom on 14 February.

The Ikey Tigers' new coach, Kevin Foote, a former SA Sevens captain under Chester Williams, appreciates that he has big boots to fill, replacing John Dobson who is now head coach of the Western Province Vodacom Cup side. But he plans to stick to the team's winning formula - UCT's brand of running rugby.