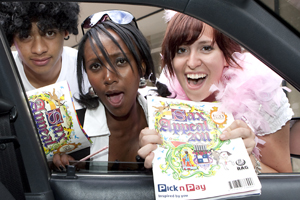 Sax Appeal vendors out in force.

UCT RAG's annual feather ruffler and beacon of free speech, SAX Appeal, may be a septuagenarian, but a magazine is only as old as the people who sell it.

First published in 1933 and first banned in 1942, the magazine once again took to the streets on 10 February, carried by undergraduate men and women who appeared to have raided the same wardrobe.

Monday Paper was there to ask, "How're sales going?"

Sorrel Charmichael, BA, second year
"I got here at 5am and there are loads of us. I'm having great fun. We have lots of people so the sales will be good, but individually the numbers won't be so great."

Choble Ngcobo, BSc, first year
"It's been a very good experience and a way to give something back to the community. I've made only three sales and I've been here since three in the morning, it's that hectic. And some people are quite mean, but that's okay. That's just how life is." 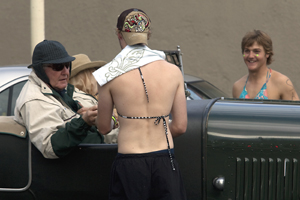 Celeste Jacobs, BA, third year
"It's been fine so far, except one lady told us not to touch her car and she was quite aggressive, but I think it's just because she's not a morning person."

Chris Parker, BSc, first year
"I enjoy selling it, but it's actually very difficult. I didn't realise that some people can be really stingy. I mean, it's only 20 bucks and it's going towards charity. But the day's not over. I've had a few dirty looks but that might have something to do with the way I'm dressed. At least it gets their attention."

UpdateTwo students were involved in traffic accidents while selling SAX Appeal. Their injuries were not life-threatening and both are expected to make a full recovery.