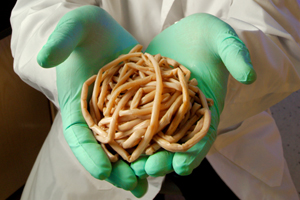 Wormy woe: A mass of Ascaris lumbricoides worms, which had been passed by a child in Kenya, Africa. (Picture courtesy of James Gathany/CDC.)

Professor Kelly Chibale (pictured below), who holds the national research chair in drug discovery at UCT, has joined an international project that will prospect African biodiversity to find potential treatments for diseases caused by parasitic worms.

Chibale, of the Department of Chemistry and Institute of Infectious Disease and Molecular Medicine (IIDMM), will join forces with standing collaborators Professor Timothy Geary and Dr Eliane Ubalijoro, of McGill University in Canada, who received a two-year $1 million grant for this landmark work. This money will be shared with scientists, including Chibale, from two African institutions (UCT and University of Botswana), which partnered McGill University in the grant application. The funding for the work hails from the Bill & Melinda Gates Foundation, Grand Challenges Canada, and the Canadian Institutes of Health Research. 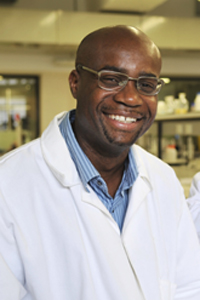 More than one billion people, or one-sixth of the world's population, suffer from Neglected Tropical Diseases (NTDs), which cause disfigurement, disability and even death in the developing world. Geary's research focuses on parasitic worms, or helminths, which unlike external parasites like lice and fleas, live inside the body. Approximately three billion people around the world are said to be infected with helminths. (They're also responsible for massive loss of livestock productivity, points out Chibale.)

This is new ground that Chibale and his team will cover. Also this grant will come with new technology transfer in the form of a mechanism-based High-Throughput Screening platform, which will be set up in his labs at the IIDMM, where researchers will screen large chemical libraries.

"This technology transfer is crucial to us because researchers in Africa, including ourselves, in addition to having limited financial resources to tackle the disease burden, have also been challenged by a limited skilled manpower base and poor access to technological platforms to conduct drug discovery and development research."

Other researchers from Africa will include Professor Berhanu Abegaz and Dr Kerstin Marobela of the University of Botswana.