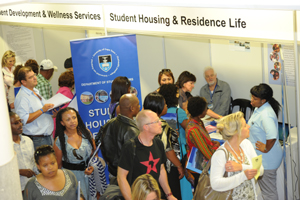 If the reaction of the audience at the Parent Orientation days is anything to go by, then the event met its objectives: questions were answered and fears were allayed.

"UCT has a good track record, but its exorbitant fees have always been a cause for concern," noted parent Steve Soobramoney. "But the explanations given [at the orientation] made me understand, and the government should come to the party," he added, referring to vice-chancellor Dr Max Price's introduction.

Mthuthuzeli Scott from Bhizana in the Eastern Cape said his family chose to send his son, Monwabisi, to UCT because many of the university's graduates have done so well for themselves. He hopes Monwabisi will benefit from the university's financial aid scheme, one of the support structures and services Price explained to parents.

While Price advised parents to encourage their children to prioritise their studies, particularly in the first six months, registrar Hugh Amoore was more specific.

Amoore called on parents to monitor the progress of their children, and to encourage them to seek advice when problems arise.

UCT hosted two Parent Orientation sessions this year - one for Cape Town parents on Saturday, 29 January, and a mirror session for out-of-town parents on 1 February.

View photo album of the event.